The first day of spring is the cue for the transfer speculation machine to go into second gear, ahead of what should be a full-throttle summer. As an international powerhouse, Manchester United will always be under the spotlight in that regard.

Prices are now being put on names going to and from United in the coming months, and the recent saga involving Luke Shaw – who now appears to have no future at United – has only strengthened the influence of various markets that relate to United departures. Shaw is odds-on to leave for any club, but Tottenham are the current frontrunners to sign Shaw by 31 August. By the same token, United have relatively short odds against them in the race to sign wantaway Tottenham left-back Danny Rose.

Once a manager has publicly singled out a player for criticism, there is no going back. That is, at least, the opinion of Sky pundit Matt Le Tissier, who spoke out against Jose Mourinho, saying in no uncertain terms that the ‘Special One’ is “destroying” Luke Shaw. 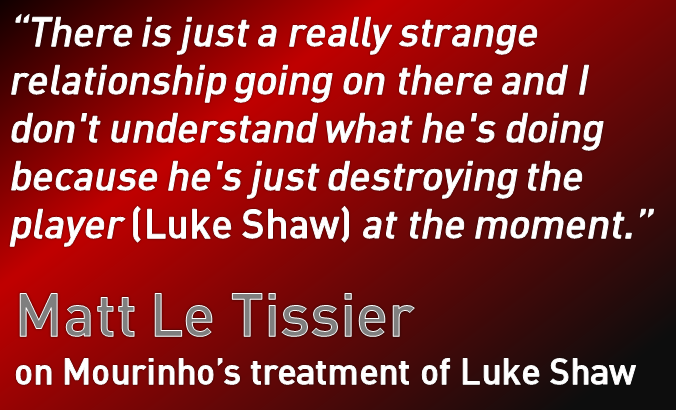 This is not the first time that Mourinho has criticised Shaw. While many people will disagree with Le Tissier, and reaffirm their belief in Jose Mourinho’s successful brand of reverse-psychology, there are reasons far more grounded in reality that Shaw simply cannot cut the mustard at United. At face value, a Shaw/Rose swap deal makes sense, but with the eliminations of Tottenham and Manchester United from the Champions League in mind, a swap deal will not address the issue of depth, and the ability (or lack thereof) to battle on two fronts.

VERDICT: No – Regardless of Mourinho’s criticisms, the proverbial writing has been on the wall for some time, but a like-for-like swap does nothing major to aid Mourinho’s quest to build the United squad.

Ryan Mason and Matthew Upson discuss the question on everybody’s lips; is Shaw getting a rough ride at United?

Again, only a cash plus player deal could possibly see Lukaku and Kane swap places, and this would be the biggest gamble of all. Since his arrival from Everton in July 2017, Lukaku’s career at Old Trafford has been overshadowed by a fanbase split on his worth to the team as a whole. The project started with great promise though. After being second-favourite in the top scorer market on Betway on the eve of the 2017/18 season, he is (as of 21 March 2018) priced at an astronomical 250/1 to finish as the league’s top gun. Lukaku’s lengthening odds have been aided in no small part by a minor decline in the winter of 2017. Indeed, a somewhat ponderous derby performance, as reported by BBC Sport on 10 December, proved to be the point of no return for some disgruntled fans in the immediate aftermath. Harry Kane, by contrast, remains on course to smash all records for an Englishman in the Premier League.

VERDICT: Jury’s Out – With all due respect to Tottenham, Manchester United’s superior tenacity when it comes to winning silverware could be the deciding factor in such a move. A cash plus player deal would be inevitable after the season Kane has had and, no matter what people may think, Lukaku still boasts a blend of physical prowess and finishing power in the final third is unmatched by anyone in the Premier League.

Pogba can be excruciating to watch when having an ‘off-day’ but, when one considers that he averages an assist every other game, it is only then that the forward drive he provides truly gets some appreciation. The Frenchman’s rate of assists utterly dwarfs those of Ander Herrera and Nemanja Matic. Given Pogba’s more flexible role in the centre, these stats stand to reason but, pound-for-pound, Pogba still beats his Premier League peers by a comfortable margin 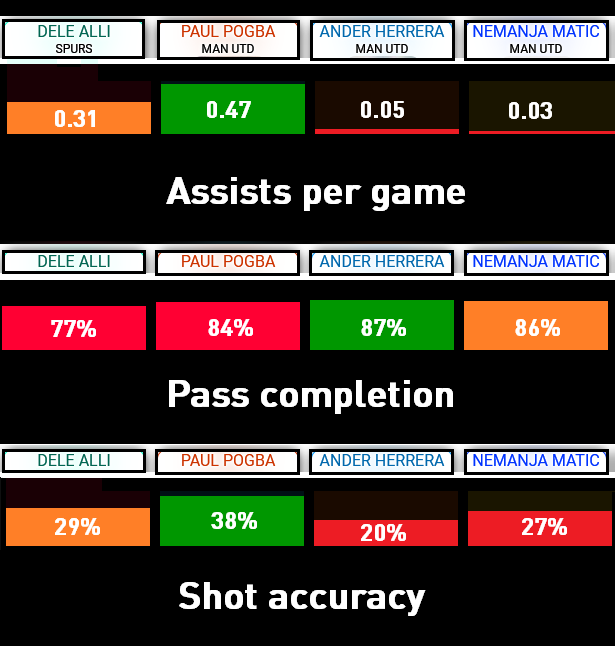 United fans, once so used to the sight of Pogba’s personal idol Paul Scholes bursting through hapless defences time and again, rightly demand forward momentum and zero respect for the opposition. Pogba’s future remains uncertain but, should Jose Mourinho see Alli as a suitable replacement, he can at least rely on the residual magnetism that still from the Ferguson era to lure him to Old Trafford.

VERDICT: No – This could, however, change if either United or Tottenham fail to finish in the top four. If, for instance, Tottenham finish fifth, Alli’s odds of joining United, without the need for a cash plus player deal, would tumble.

So, there you have it; three potential player-for-player swaps between Manchester United and Tottenham. Any we’ve missed?