If there’s one thing United fans struggle to agree on, it’s which of our great sides could be given the title ‘the greatest ever’. Whilst United’s success in 1999 is unrivalled by any other team, some argue that our teams from the early 90s were superior, however were held back in Europe because of the foreigner rule. Others claim it is our teams from the 50s and 60s who deserve this accolade, believing the Busby Babes or the team he created in the ten years following, played the greatest football than in any other era.

Today, United legend, Ole Gunnar Solskjaer, who has his testimonial next week, has admitted he hopes this current United side will be the greatest of them all.

“I’m excited to see if this United team can become the best ever,” Ole Gunnar Solskjaer said this week. “Sir Alex has laid the right foundations. He’s always had a knack of buying the right people at the right time. Remember in 2006/07 we only signed Michael Carrick and Tomasz Kuszczak and we’d not been close to winning the league for three years. The Gaffer trusted us and we won the league. Last summer he signed four young players, sold a few others, and he did the double. He knows he has to challenge the boys all the time to keep improving them. We had a few disappointments in the Champions League after the 1999 season, in particular losing a semi-final to Bayer Leverkusen in 2003, and he won’t want to fall into that trap again. I hope this squad has the ability to become the greatest in United’s history. They definitely have the right manager to achieve that goal.”

Which side is the greatest ever? 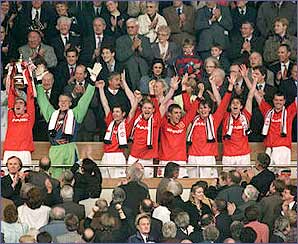