Ruud: Ronaldo Will Be At Real Madrid Soon 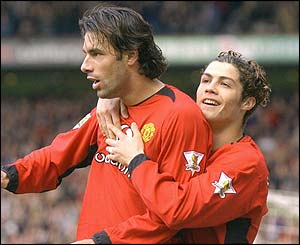 Ruud van Nistelrooy’s scoring record at Manchester United was prolific. Whilst spending most of him time in the box, he put the ball away at ease time after time.

Even in his last season, when he fell out of favour with the manager and played less, he finished the second highest scorer in the league.

When he left, the media feared for United, with Sky Sports and The Guardian predicting a fourth placed finish. ‘Where are all the goals going to come from?’ they asked.

Whilst Ruud still had fond memories of his time at United, he left under a bit of a cloud, so could be forgiven for feeling rather flattered to see how important he supposedly was to United. However, the next few seasons proved he was an important as he’d like to think.

United went on to win the league for the following two seasons, despite not winning it for the past two seasons Ruud was with us, as well as winning the European Cup.

Ruud has spoken about United a lot of the past two years, talking of the hurt he felt when he left us. To be honest, it falls on deaf ears where I’m concerned. My patience had run out by the time he signed for Real Madrid. I have plenty of respect for all he achieved at United, but I don’t particularly like the guy.

Today, Ruud was continued Real Madrid’s dirty work, tapping him up on their behalf.

“One day Ronaldo will join us,” he said. “This could happen next summer, or the one after.”

No doubt he’s right, but it is Ruud’s place to talk about it? Probably not. Considering his bitch fights with Ronaldo, calling the Portuguese youngster over the death of his father, it’s rather surprising that Ruud is now so eager to see a reunion.

Whilst talking about former players, Silvestre is ready for his Arsenal debut, after getting some match time for the Reserves in the past week.

“I feel good,” said Silvestre. “I got through the 90 minutes without any discomfort or pain and physically I felt at the same level as my team-mates so it felt good. The boss (Wenger) asked me if I wanted to play because it was a long time since I last played competitively, back in August or July with United. Before I get back with the first team it was good for me to play and get something other than training. It was a perfect run-out before playing with the first team. It is a good level in the reserve league and getting to know my young team-mates was a good experience.”