Teddy: Tottenham Will Abuse Berb Because He's A Threat 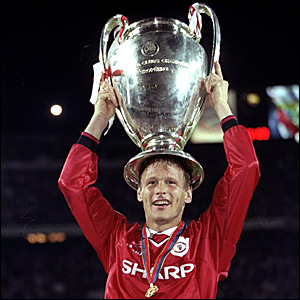 Teddy Sheringham knows how Dimitar Berbatov will be feeling today, after he made the move from Tottenham to United after also believing Spurs didn’t match his personal ambitions as a player.

“Ohhh Teddy, Teddy, went to Man United and he won fuck all!” were the chants after Sheringham’s first season with United. The following season he won it all as part of United’s historic Treble winning side, scoring a goal in the European Cup final.

He was booed and jeered when he returned to White Hart Lane, but as if he could give a shit less. Sheringham had won nothing in his five years at Spurs, yet just after his second season at United he had three winners medals in his pocket. That is why players leave Spurs for United.

Ahead of today’s match between Tottenham and United, Sheringham has given his opinion on Berbatov’s situation.

“The Spurs fans won’t be very happy with Berbatov and won’t be treating his return lightly,” said Sheringham. “I understand it. Football fans are very passionate and loyal to their team and Berbatov will just have to deal with it. The spotlight is on Tottenham because of the homophobic abuse dished out to their former player Sol Campbell at Portsmouth. But Sheringham believes verbals from the crowd are just part of football life. It’s been going on for years, this is not the first time it’s happened. I don’t really see why the authorities are suddenly clamping down on it now. Fans do it to put players off and I don’t think Spurs are any worse than any other club. They show their feelings like everyone else.”

Teddy then reflected on the treatment he got upon returning, but says Berbatov should take it as a compliment.

“Berbatov is a brilliant player and the fans didn’t want him to go,” he added. “They didn’t want me to go either and I got hammered. But if supporters are abusing you that means you must be a threat to their team. You can’t get upset about it. You could say I got a bit of abuse. But that was okay, I didn’t mind it and I took it as a compliment. As players you just have to get on with the job. I signed for Spurs again four years later and they welcomed me back with open arms.”