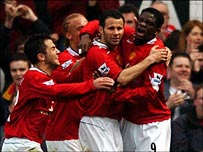 What a superb end to the season. Over the past few weeks filled with disappointment seen in the home draws with Sunderland and Boro, losing to Chelsea at the Bridge and them picking up the title, Ruud’s lack of motivation, which was then rounded up by a 6 week injury to our star Wayne Rooney, we needed to end the season on a high. United certainly did that today.

A week before, a fan shouted out to Gary Neville calling him a disgrace. In response, Gary said “On Sunday, when we score a goal again, he will be jumping up and down.” I wonder if that same fan was there to see United give one of their best performances of the season today?

The pressure was certainly on with no Ruud, Rooney or Park in the starting lineup, ahead of a must win game if we wanted to be certain of automatic qualification in to Europe. Saha, Rossi and Richardson took their places, and each of them thoroughly deserved the chance they were given. Today was Richardson’s best ever performance in a United shirt (and without it, after celebrating a cracking goal, which he was owed, after a sublime shot which ricocheted off the cross bar, on the line, and out) and showed that there are still players willing to fight for their place, even if Ruud is not.

United looked hungry today, and from the first whistle you knew they meant business. There was no way they were going to let the scousers pip them to 2nd place, and just to really make sure of that, they found the back of the net 4 times. Rossi, who has had a phenomenal season for the reserves, played out of his skin, and wouldn’t stop trying for a goal, that unfortunately for him, never came. But every ball in the air he was trying to win, every glimpse at goal he was firing, every opportunity to put a player through he was taking. Ruud can/could have learnt a valuable lesson from this young lad.

Saha reminded us why Ferguson has put so much faith in him over the past couple of weeks, involved in play up and down the pitch, and netting the first goal for United.

Aside from getting 2nd place in the bag, and doing it in such style, the highpoint of the day was seeing Scholes and Ole return to the first team. Scholes played as though he hadn’t missed a game, and any trouble he’d been having with his eyesight seemed a distant memory. His passing and first touches were reminiscent of Scholes at his best. Ole still doesn’t look sharp yet, and maybe he never will again, but I don’t think any United fan can ever be disappointed at seeing Solskjaer in a United shirt at Old Trafford. The only thing that could have possibly made the day better would be to see Heinze getting a run out.

All in all, a great day at Old Trafford, with superb football, and superb atmosphere. United fans broke the Premiership record attendance again today, with a whopping 73,006 present, and you could hear every one of them showing their enjoyment at watching such beautiful, exciting football.

So just as things start getting good, the season ends! Lets hope all our players have a good World Cup, and all of them are at the peak of fitness for the beginning of next season. It’s about time we won our trophy back!