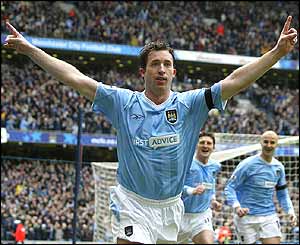 Derby day weekend has long been my favourite weekend of the year. It sometimes ends in tears but generally it’s great, regardless of the result.

My local is a red pub but there are a few blues who drink in there. There’s plenty of banter and usually it’s good natured. We’ll take the piss out of each other and have a laugh, but generally everyone gets along fine.

Five years ago things were very different in the local. We got to the pub for midday and ate chips and curry together on the benches outside. There was plenty of banter. After us winning the title the season before, Arsenal were enjoying going unbeaten and Chelsea were making the most of Abramovich’s money, meaning we were headed for a third placed finish.

Our last match had been against Porto in the Champions League and we’d been robbed by the officials. We needed a good result against the bluenoses to lighten our mood.

None of us could have predicted what was about to happen though.

Tim Howard, Phil Neville, Wes Brown, Mikael Silvestre, John O’Shea, Cristiano Ronaldo, Darren Fletcher, Nicky Butt, Ryan Giggs, Paul Scholes, and Ruud van Nistelrooy were our starting players. With three minutes played, Robbie YSB Fowler made it 1-0. I’m not sure how well his bragging on behalf of our Liverpool’s European success went down with City fans, but his four fingers were certainly not well received by our fans.

Then Jonathan Macken, a United youth team product made it 2-0 with just over half an hour played. Things were not looking good. Paul Scholes gave us a bit of hope a few minutes later but the day was not going to go our way.

Mikael Silvestre, totally out of character (!), fucked up to gift Trevor Sinclair with City’s third, before Shaun Wright-Phillips scored their fourth to make the day totally humiliating.

We’d knocked them out of the FA Cup a month before, we’d beaten them at Old Trafford that season, but we’d lost 3-1 to them the last time we played at their place. Still, there was no real reason for the reaction but a few hours worth of drinking lead to carnage in my local.

It was like something out of a western, with chairs and tables being thrown, glasses smashed on the floor, and punches flying. I’m sure there were blues punching blues, reds punching reds, with everyone involved in the brawl. In the end, three riot vans were parked outside and the main road was closed off. We left with black eyes and bloody noses and we woke up with sore heads.

It’s become a bit of a joke and a bit of legendary story in our local, with feelings never matching anything as negative as they were that day.

But this derby day is the first in my life time where City have actually got a fairly decent squad. Whether they’ll finish in the top four depends on what the likes of Arsenal, Villa and Spurs do this season, but they’ve had a great start to the season and deserve to be taken seriously. Whilst over the long term I have to agree with Ian Brown in believing that City will find a way to fuck up their fortunate position, we have to think they have enough quality players to make a victory today difficult for us.

I fully anticipate a nasty atmosphere for the game, although hope that won’t carry through to the local afterwards. If Carlos Tevez is to play, they’ll be singing about Munich without even realising, whilst we’ll be booing the shit out of him, much to his surprise. It is going to be hostile. If they take the lead, we’ll be even angrier than we can imagine. If we take the lead, we’ll take the piss and make them angrier than they can imagine.

Regardless, this match won’t decide anything. We’ll finish above City, whether it’s three, one or no points we pick up against them. Whilst I always want a win on derby day, this season it all feels a lot more real. They are more desperate for it than ever before and that just adds to my desire in wanting them be disappointed. The fact that we have Tevez to play against just makes the occasion even more heated. I do fancy us for the points though and am looking forward to it more than I have for a long time!

Come on you reds – fucking do those blue bastards!