A Draw At The Emirates, Just What We Deserved? 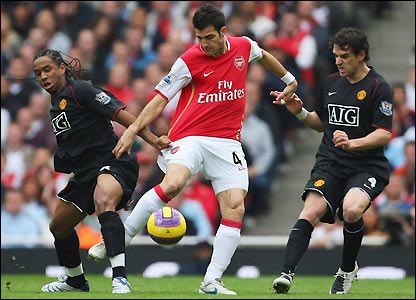 Before kick off today, I would have gladly taken a point from the Emirates. As the full time whistle went, I’m still more than happy with a draw. Not as happy as the Arsenal players and fans with were a draw though, it has to be noted. I suppose we should be used to teams celebrating as though they have won the league after picking up a point at home against the Champions.

The first half, up until the final minute, was played out exactly how I hoped it wouldn’t. I wanted us to go the Emirates and play great football. The final scoreline aside, I wanted to see some quality passes, top notch attempts on goal, and blistering pace on the attack. It was a disappointment to see the ball given away time and again. We would win back possession, then pass it straight to the feet of an Arsenal player. The ball was taken from us far too easily, and we weren’t breaking with the fluidity and ease we as United fans have been accustomed to seeing. For Rooney to score in the last minute of the first half, a goal which was credited to Gallas for his deflection, will have had all the lame commentators chatting on with the clichéd “that’s why they’re Champions”, and whilst entirely made up, I had little assurance that we were going to keep that lead. The only comfort I had was that despite Arsenal’s performance, Van der Sar had very little to do.

It felt like game over when ‘super Cesc’ scored so early after the kick off, and as they dominated possession, kicking the ball around our half, I feared for the worse. The scoreline could get quite embarrassing. Despite the brilliant defensive record we boast, I’ve seen far too much sloppy defending over the past few weeks, which would have been costly if playing a superior team. In our past two matches, two goals have been conceded through our defenders leaving the opposition with acres of space around them in the box. It was therefore no surprise when Sagna somehow managed to get the ball back across the box that Fabregas was completely unmarked and ready to tap the ball in past Rio and Van der Sar.

However, my fears were relieved as the second half progressed, and United really started to turn it on. Whilst not entirely reminiscent of the match winning displays of weeks gone by, we looked like we were definitely in the game, and that we weren’t going to go out without a fight. Rooney could have given us the lead from a well worked move which saw Giggs float the ball over the Arsenal defenders and straight on the head of the jumping Rooney. However, he seemed to be unaware of exactly where the goal was, and headered it straight and wide.

With fifteen minutes to go, Anderson, who up until that point had been our man of the match, made way for Carrick, who was making his first appearance since his injury a month ago against Roma. Tevez, who had worked tirelessly, albeit without much end product, was substituted for Louis Saha, who has just four league appearances under his belt this season due to injury. Saha has thrived as a substitute on two occasions already this season, scoring against Sunderland and Chelsea after coming on, and today he was pivotal in the goal which gave us the lead for the second time. He turned his man, fed the ball through to Evra, who drew Almunia out of his box, and then provided Ronaldo with an easy tap in.

There was a feeling of doom in the remaining eight minutes of time, with Arsenal eager not to blow their unbeaten run, and memories of this same fixture last season when Arsenal pinched all three points in injury time. It wasn’t three points they managed this year though, Gallas collecting just the one with a volley from six yards, unmarked.

Yes, of course it is disappointing to lose three points right at the end of a match, and even more painful when acknowledging the team have not learnt their lesson from last season, but a point is a point, and to get it away from home against our current biggest title rivals, marks an achievement for our lads. Whilst they would be well appreciated, three points is not what we deserved today, and I’m happy enough to admit that.

Hargreaves and Anderson managed to keep Arsenal’s five man midfield quiet, and the team who all the commentators are drooling over at the moment, became increasingly sloppy with possession in the second half, and couldn’t pull off their one touch passing on numerous occasions. United boasted an 83% success rate for their tackles, compared to Arsenal’s 65%, and it was due to this that Van der Sar was not troubled half as much as we might have imagined before kick off.

On reflection, today was pleasing enough for Manchester United, and although the boys will be gutted on their journey back home for conceding when they did, we do need to put this result in context. Arsenal have the best home record in the league so far this season, us aside (I’m not going to get in to the football of United vs the football of Arsenal debate now), are playing the best football in England, and despite being written off before the start of the season, are being tipped by some to win the league this season. Whilst I will not for one second entertain the idea of them being crowned Champions come May, it cannot be denied that they are looking bloody good at the moment and to come away with a point, after not playing too well, is a good result for us.

It’s exciting having the rivalry between Arsenal again, and I definitely had the butterflies of years gone by at kick off. How long this title rivalry will last is another matter, but Arsenal’s fixture list will please their fans for the next few weeks, with Reading, Wigan and Villa to come, taking us to December, whilst we have what should be winnable games against Blackburn, Bolton and Fulham. I’d have loved to see us go top of the league today, and it would have been a wonderful way to do it, beating our old enemies Arsenal, but that is just me talking from my position of a United brat, spoilt by success for years. Our players are returning from injury, our new players are settling in, and our old players are really starting to find form. We have to be patient, the players have to keep on doing what they are doing, and it will not be long before we’re singing about being top of the league again, whatever your gooner/dipper/bitter mates have to say about it.