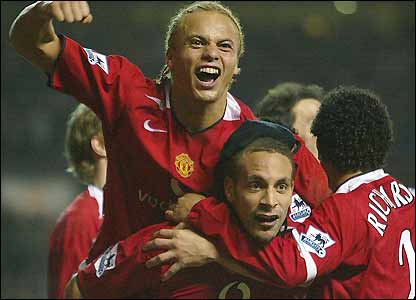 Whilst Wes Brown is struggling to find an agreement over his contract renewal, Rio Ferdinand is on the brink of starting talks with the club over his new contract. I find it remarkable that the club are unwilling to budge on their initial offer to Brown, which would leave him earning less than team mate John O’Shea, but imagine that Ferdinand will face nothing like the struggle Wes has.

Back in 2005, Rio Ferdinand faced much criticism from the fans, after taking several months to put to pen to paper on a contract reportedly worth £100,000. Just a year after his eight month ban, following his missed drugs test, Ferdinand was holding out for a deal worth £120,000 a week. The club had paid him £75,000 a week for the eight months Ferdinand was forced to sit out, with our title challenge dissolving rapidly in his absence. The fans were not best pleased and let Rio know exactly how they felt!

Whilst contract negotiations were still under way, Rio Ferdinand was spotted with his agent and Peter Kenyon in London, with reports of another Chelsea tapping up scandal filling the papers. If Rio wasn’t going to get the money at United, would he really be prepared to meet with Chelsea behind our backs? Both Ferdinand and Chelsea claimed it was a chance meeting, but this didn’t stop Ferguson publicaly laying in to Kenyon, claiming the matter was now in the hands of the authorities.

In our pre-season friendlies in 2005 against Clyde and Peterborough, after Ferdinand had undergone a few months of contract negotations, the fans booed him. Ferguson stood by the player, publicly supporting Rio and condemning the fans. “I’m not entitely happy with the reaction of the fans,” Fergie said. “Players who go on the field and hear their own fans booing them is not encouraging at all.”

David Gill also stood behind the player, saying, “I understand the fans want to know what is going on. But Rio has said he wants to stay, Alex wants him to stay and so do the owners and the board. It may be reflecting badly on Rio, but not with me it isn’t. Yes, it is a lot of money by any stretch of the imagination but it is still a big commitment. You have to think about your worth. I respect him for that. It is a crucial time in his career and he needs to be happy with that.”

There were reports that when United played Kashima Antlers further in to the pre-season, Ferdinand stuck two fingers up at the jeering United fans. Chants of “Chelsea rent boy” and “greedy Rio” were directed at Ferdinand which eventually caused him to snap. He was let off the £75,000 fine because Sky Sports refused to release the footage.

Rio’s decision to snub our initial offers would have likely infuriated our faithful regardless, but this period happened to coincide with the Glazer take over. With fans furious over the direction our club was headed in, now more a money making business than ever before, Ferdinand’s decision to ask for even more money couldn’t have come at a worse time.

Ferdinand did eventually sign the £100,000 a week contract though, and his injury time goal against the dippers a few months later helped in rebuilding his relationship with the fans though. However, some reds have never entirely forgiven the player, feeling he is far more concerned with the bling and the dosh than he is our club.

The treatment of Rio Ferdinand over the years, in comparison to Wes Brown, highlights what I feel is a big problem with our club. Brown has been nothing but a loyal servant to United, playing when required and sitting out on the bench when he’s not. Ferdinand, however, has a long list of black marks to his name, from the drug’s ban to stalling on his £100k a week contract, from his embarrasing “you got merked” programme to the disastrous Christmas party, yet he is rewarded with the Captain’s armband and ludicrous sums of money.

Following the game where Ferdinand stuck his fingers up at our fans, Queiroz also offered Ferdinand support, claiming, “we do not condone anybody who questions the commitment of our players.” However, Ferguson has been more than happy to publicly slate Wes in the past weeks. He claimed Wes was in his “agent’s back pocket” and that it didn’t seem to matter to the player that he had been with the club since he was 12 years old.

Reports today suggested that Rio Ferdinand was going to open up talks on a new contract in the summer, with his agent Pini Zahavi, who was present at the Kenyon meeting, supposedly telling the club his player did not want to start them until then, despite a request for earlier talks from the club. With only a year running on his current deal, the talk today has suggested Ferdinand could be off next year on a free transfer. However, Zahavi has since confirmed that the talks will start “shortly”.

With Rooney earning £110,000 a week and Ronaldo on £120,000, I wouldn’t like to guess what Rio Ferdinand will be asking for, but surely it will be in this region, if not more. He rightly fancies himself as the long term replacement for Gary Neville as captain and won’t want to be earning less than these youngsters. Hopefully this will be a painless process though, whatever the cost, with Ferdinand not making the same mistakes as last time.

Do you think Rio should be offered more than Rooney and Ronaldo?