Ahead Of Our Trip To The Reebok A mistake from Gerard Pique saw Nicolas Anelka put Bolton 1-0 up and saw us drop three points behind Arsenal at the top, who had won their game, as had Chelsea.

The Reebok had been our stomping ground for some time so it was quite a shock to see us lose all three of the points there, without putting up much of a fight. We hadn’t lost there since 1978 and had scored 21 goals there in the eight years they had been in the Premiership.

We have only been there once since the 2007 defeat and Dimitar Berbatov came up with the goods in injury time to earn us the three points.

Can we expect joy at the Reebok again today?

The comments of Sir Alex Ferguson in the press over the past few weeks have been very sensible. Whilst Arsene Wenger prattles on about Martin Taylor and Carlo Ancelotti desperately claims being knocked out of the Champions League is a good thing, our manager has talked with a very balanced view of the title.

“On paper, Arsenal have the easy run in but at this stage of the season I’m not sure whether that works, whether it means anything at all,” Ferguson said yesterday. “You can drop a couple of points like Chelsea did at Blackburn last Sunday and your advantage on paper all of a sudden doesn’t look so good. The name of the game is to win your games and hopefully we can do that. That’s our best way of looking forward. I don’t think there is a bigger challenger from one team than another, we’re all in the same pot together. We’ll rely on our experience which is vital and hopefully we can keep a relatively clean bill of health between now and the end of the season.”

Our manager has been in this situation so many times and has proved successful on an incredible eleven occasions. He has a group of players he can rely on to deliver and without being flashy or arrogant, he can talk calmly about our title chances.

“With the three of us at home on the last day, if we have to win our home game I would be quite happy about that, and the other two will be saying the same thing,” he continued. “I am trying to work out the run-ins and what the eventuality is going to be and I cannot see anything other than it possibly going to the last game, unless somebody blows up.”

Would Wenger be confident his team of inexperienced players, with Sol Campbell and Mikael Silvestre the only players to have ever played a part in a title winning season before, could win the league on the final day against Fulham? Does Ancelotti have total faith that his players won’t bottle it again if their result on the last day is the decider? I don’t know but I’m pretty sure neither of those managers are as confident in their players as Ferguson.

We travel to the Reebok today with a group of players who are hungry for that fourth consecutive title and who know what is required of them to get it. There is still the possibility of dropped points and there would still be the possibility of winning the league on the back of that, but for the title to be in our hands, we must keep on winning. If we win today, it means we can even afford to draw with Chelsea next weekend and still be top (unless Arsenal score eight goals over the next two weekends).

Bolton have won just five of the fifteen games they have played at home this season and have conceded more than they have scored. 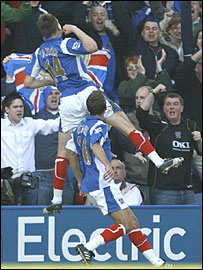 Their top scorers this season are Matty Taylor (who has scored 1 in his last 13) and Ivan Klasnic (who hasn’t scored in his last 10 games), with Kevin Davies managing just 5 goals in 30 appearances this season. Whilst Davies and Patrice Evra have a long standing feud, it is that Taylor I really have a dislike for. I’m sure it can’t all stem from the one incident I will mention, hopefully I’m not that bitter, but I remember him scoring against us for Portsmouth towards the end of the 06/07 season and absolutely hating him. He looked so fucking smug and I was just so gutted that his name and face stuck. He’s rubbed me up the wrong way ever since and I would really like to see us deal with him better than we did at Old Trafford earlier this season.

The manager has insisted that Wayne Rooney is alright to play, despite missing lots of training this week due to a problem with his knee, but I do wonder whether Rooney will play the full 90 minutes today. We’re travelling to Germany in three days then have to play Chelsea four days after that, so we need to be careful with him.

The dream scenario is that we power out of the blocks, with Antonio Valencia and Nani scaring their full backs shitless, with Rooney creating plenty of space in the box to put away our chances. Michael Carrick is due a good game after being so disappointing of late whilst our first choice defence should enjoy another outing together, given that those occasions have been so rare this season.

I hope these aren’t famous last words but I have been very impressed with Gary Neville over the past few weeks. When he first came back to the team I found it a little awkward and embarrassing that we were still playing him. He was shockingly bad, offered nothing to the team and our players seem reluctant to even pass the ball to him. I assumed that was him over and done with, rather than being more patient and understanding that to find form after such lengthy spells out is a difficult task. If this is to be his last season, we can expect nothing other than him giving his all to help us win another title.

So, here’s hoping Birmingham and Aston Villa can pinch a point or more from Arsenal and Chelsea, but that really would just be to set our minds at ease. We have to be looking to get a win here today and if we were to be really spoilt, ask for a big boost to the goal difference that Chelsea clawed back against Portsmouth.