Alan Smith's First Year Away - Did Fergie Ruin Him? Alan Smith quickly won over the Old Trafford crowd, despite his Leeds United roots. In fact, it was probably the fact that he had grown up loving Leeds, yet was able to play his heart out for us, that warmed us to him.

See, we all remembered Smithy as that Leedscum youngster who came to our place kissing their badge. He was Leeds through and through, which meant we hated him.

Still, Leeds were relegated and Smithy spent the day crying. He didn’t ask for a transfer, but with the Yorkshire clubs struggling financially, they sold on their most valuable players, with Smith being one of them.

Considering he didn’t put in a transfer request, he was entitled to a chunk of the £7 million United were paying for him, which he declined. He also ensured there were no agent fees for Leeds to pay. All in all, a pretty decent guy.

“I grew up at Leeds and spent some wonderful years there, and I would like to thank everyone at the club,” Smith said. “Now I feel it’s the right time to move on and there could be no better club than Manchester United. To be joining one of the best clubs in the world is fantastic and I’m looking forward to the new challenges.”

The problem for ol Smudger is that he was never up for that challenge.

“When I was playing for Manchester United, before I broke my leg, I was playing in central midfield,” Smith said in the press last week. “I then missed 18 months with my injury and when Sam (Allardyce) brought me to Newcastle, he played me all over. That never really helps you. It doesn’t allow you to become consistent and it doesn’t really allow you to become settled. The gaffer knows where he wants to play me and if he’s going to play me up there, I’m going to have to start scoring goals. I’m going to have to start playing as a centre-forward, like I did when I was at Leeds and like I did when I first went to United. I know I can do that. I’d enjoy an extended run at centre-forward and I think everyone knows that’s probably my best position. It’s what’s natural to me, but if I’m going to play there and stay in the team, I’m going to have to score goals.”

Now, that might be true. If he was played in one position at Newcastle, up front, then maybe he could prove to be a success. However, I’d argue that Smith never will be a great striker, as he never has been in the past.

That might sound harsh, but if you look at Smith’s scoring record, his status, the one that attracted Manchester United, was seemingly based upon one good season.

In 2001, Smith scored 18 goals for Leeds, 11 of those in the league, seeing him the 10th highest scorer in the Premiership. That year, Leeds made it to the dizzying heights of the Champions League semi-final (incredible to believe, considering their current situation!), beating the likes of AC Milan, Deportivo and Lazio on their way. Smithy managed a brilliant 7 goals in 16 games in Europe, even scoring against Real Madrid.

The summer preceding the 2004-2005 season, saw United fork out for Alan Smith (24) and Wayne Rooney (18). United were apparently “in decline” and Alan Smith did little to help keep our heads above the water. He played in 2 more league games than Rooney, yet scored 5 fewer goals. He played in 2 less games in all competitions, yet scored 8 fewer goals. He finished the season with 6 league goals from 31 games, 9 goals from a total of 41 games. To put this in to context, Louis Saha scored 5 league goals in 17 appearances last season.

Now don’t get me wrong, this isn’t intended as a Smith-bashing article, because I really like the fella. He has a great attitude to the game and for a Leeds lad to win us over says an awful lot about his character. He even turned down England to turn out for our Reserves. But was he a great striker? A great footballer? I don’t think so.

After a year playing up front, and failing, Sir Alex Ferguson wanted to try and use Smith’s better qualities in a useful way. “Roy sees characteristics in Alan that he saw in himself as a young player, which could help Alan develop into a very good player in that position,” said the manager.

Roy Keane was injured (then left) and Darren Fletcher wasn’t good enough, so let’s try Smith in midfield. It was a reasonable enough suggestion, considering his strength and inclination to get stuck in.

When United got battered by Middlesbrough, Smith was one of the players held accountable. To be fair to him, he wasn’t given much help that day. Bardsley, O’Shea and Silvestre were three of the back four, before Bardsley’s injury after half an hour meant Richardson was playing full-back. Nightmare. Alongside Smith in midfield were Fletcher, Park and Scholes. Not a lot better.

Regardless, Smith was one of the players who Keane tore a layer off in that pulled interview on MUTV. “What is he doing there?” Keane asked, reviewing Smith’s performance. “He is wandering around as if he is lost. He doesn’t know what he is doing.”

Four days later we took on Lille, and we lost, with Smith again not doing enough. The BBC reported, “Alan Smith failed to fulfil defensive duties as Gregory Tafforeau raced forward and crossed for Acimovic, who stole between Wes Brown and Mikael Silvestre to fire high past Edwin van der Sar from 10 yards.”

When we played Chelsea four days later, who were unbeaten in 40 matches, there looked to be little hope. Smith’s midfield opponents were Michael Essien, Claude Makelele and Frank Lampard, all well established, top rated players. If Smith couldn’t cut it against Boro and Lille, what the hell was he going to against arguably the best central midfield in Europe?

Sky Sports’ Man of the Match.

Smith showed that Ferguson’s decision to try him as a midfielder wasn’t so outlandish. If he could the business against players deemed far superior to him, then there was no reason why he couldn’t make the position his own. A couple of months go by, with Smith not overly impressing, but holding his weight, in the centre of United’s midfield. More often than not, Smith was being used for less than 90 minutes, whether acting as a sub on or off the field.

February rolls on and United travel to Anfield, fighting to protect a record that has seen us last 85 years without losing to Liverpool in this competition. Smith started on the bench, with Ronaldo, Fletcher, Giggs and Richardson making up our midfield. After a toothless display, seeing us go a goal down after 20 minutes yet not managing to create a reaction, Fergie sent on the former Leeds man with 15 minutes to play. He could ruffle a few feathers in midfield, or get on the end of something in the box to level the score.

It wasn’t to be though and in blocking a powerful freekick from John Arne Riise, Smith ended up breaking his leg and disclocating his ankle. Van der Sar’s panicked waving to the touchline, coupled with Ruud van Nistelrooy turning to throw up, left the hairs on my neck standing on end with worry. Smith could be facing the end of his career. 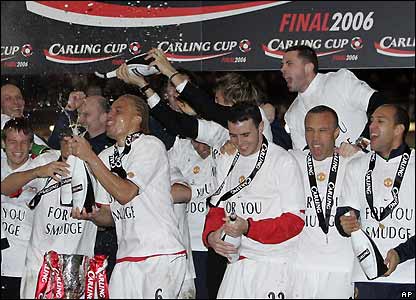 The next match was the League Cup final against Wigan. “For you Smudge” read the t-shirts we wore when lifting the cup, following a 4-0 victory. As both a player and a person, he meant a lot to us, so this was a fitting tribute for someone who might have had their career ended.

However, Smith did play for Manchester United again, now as a striker, with Fergie using the Champions League games to ease him back in to the team. He played against Benfica, Copenhagen and Lille, before returning to league football, playing for 20 minutes in our 4-1 victory over Bolton.

His highlight of the season came in the European Cup quarter-finals though, with Smith scoring the second in our 7-1 battering of Roma. The following week, he put in a blinding performance against Watford in the FA Cup semi-final, and although not scoring himself, created plenty of chances for Rooney and co.

But his Old Trafford career was over, with him not proving good enough as either a central midfielder or striker, and United not having time to see if he could improve.

When a £6 million offer came in from Newcastle, United bit their hand off. That was a year ago, almost to the very day, on August 2nd 2007, and everyone at United wished him the very best. He’d lifted the Premiership trophy that season, for the first (and probably only) time in his career.

He returned with Newcastle the following season, eager to impress. He had already played in 22 games for his new club, as both a striker and midfielder, but still hadn’t scored. How perfect would it be for him to return to Old Trafford, score a goal, but celebrate modestly in respect for our fans? Sadly for Smithy, the day didn’t quite match that of his daydreams, with his side getting stuffed 6-0 and him getting sent off in the final minute for a comment he made to the referee. He was given a standing ovation as he walked towards the tunnel, with our fans chanting his name, but he didn’t look up once.

Despite not scoring any goals in 36 games, Michael Carrick has spoken fondly of Smith this week, claiming he will have a great second season with Newcastle.

“Smudge is a good player and he played in different positions last year for Newcastle,” he said. “When he played last year for Man United up front he was tremendous, and in the Roma game in the Champions League when we won 7-1 he was brilliant. Everyone who knows him knows he gives everything. He’s got a lot of quality and I think he’ll have a great season. He’s a good, honest lad and I’m sure he’ll do well.”

See, now that’s where the problem with Smith lies. He exhibits all the qualities that are appealing in players, his tenacity, his passion, his willingness to fight for the shirt, but essentially, he doesn’t have the quality to match it. Players like Carlos Tevez have a similar attitude to Smith, but with that, have the ability to beat players and score goals.

So, did Fergie ruin Smith by trying to convert him to a midfielder? Course not. The manager was simply trying to give Smith the greatest chance possible at cutting it with a great team, but sadly, he fell short of the mark, as a striker and a midfielder.

I sincerely hope Smith has a better season, but I won’t hold my breath.