And the reds go marching on, on, on! 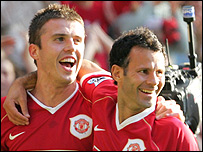 Before the Spurs game, the press were keen to remind everyone that United had won their opening three games last season, and that we shouldn’t get too carried away. What they weren’t so keen to mention is that United are playing much better football than any of their close rivals, and the performances of the opening three games of last season pale in to insignificance compared to this season. Before the Spurs game, we’d only beaten average sides, so it meant nothing (even though Chelsea had already dropped all points against the Mighty Boro, and Liverpool struggled to get a point, thanks to an undeserved penalty, against Massive Sheff United). Spurs was our first real test, and Sky Sports had us down for a 1-1 draw.

With no Rooney and Scholes, two of our most creative and important players, then it was fair to expect United might struggle in front of goal. United fans still cringe a little when Ronaldo steps up to take a free kick. Giggs was up for taking it, and Ronaldo shooed him away. 40 yards out. Ronaldo hit the ball so hard, so sweetly, giving Robinson the only option of letting it rebound off his hands. Giggs got repaid for his patience, and was left with a rebound to guide with his head in to the back of the net. After just being named Premiership Player Of The Month before the start of the game, Giggs seemed keen to prove that he did still have what it takes.

Spurs weren’t up to the task. They had a few chances they could/should have put away, but never looked too dangerous. In a lot of ways, the game reminded me of the same fixture last season, which ended 1-1. The difference is, United look a lot more in control this season, look a lot more composed, and don’t look like dropping points.

Spurs miss Carrick, if their phone ins after the game are anything to go by, as well as their performance on the pitch. Carrick, without playing out of his skin, dominated the centre of the midfield, and certainly did a job for United. With every game he seems to become more and more settled, and it certainly suggests that one step at a time, Ferguson is bringing in the right players to resolve our long running midfield problem.

Man of the Match for me was Wes Brown. He had an amazing game, didn’t do a thing wrong. Every 50/50 ball was his and his passing was spot on. Put Rio, who just claimed back his spot in the England team from Wes, to shame on several occasions. Moan of the Match has to be Louis Saha. After starting the season well, he looked to be lacking in confidence in front of goal yesterday. Had several chances you would have expected him to finish, which didn’t come close to becoming a goal. With Scholes and Rooney back for the Arsenal game, I hope he can redeem himself, and return to the form of the opening day of the season, where our attack looked capable of ripping apart any defence.

Great start for United. 4 wins out of 4. No need getting carried away, the league was never won in the first four games, but there are plenty of things for United fans to get excited about at the moment. After the complaints echoing over Ferguson only bringing in one player this summer, his decision has been justified thus far. United are playing the best football they have done in years, and this is still without our first XI back. Smith, Vidic and Heinze’s returns are imminent, as well as the aforementioned Scholes and Rooney. We just need to do the business against Arsenal, and I think this United side will be more confident of doing that now than they have done for a long time.