And the RoM Moment Of The Season Is...

Members of the forum had to choose between United beating Barcelona thanks to Scholes’ goal, United beating Arsenal and ending their season following Hargreave’s freekick, our win over Wigan on the final day of the season, where we were crowned Champions after Giggs’ goal, John Terry’s penalty miss in the European Cup final, and Van der Sar’s save against Nicolas Anelka from the same game.

Which moment filled us with more joy than any other? 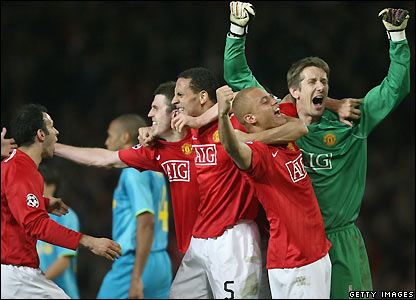 After years of trying to emulate the success of the 1999 team, Scholes’ goal against Barcelona in the Champions League semi-final finally gave us that opportunity to do it.

The anticipation was massive before kick-off, the atmosphere was electric, as this game was our biggest challenge in some time. We were taking on a team that boasted the talents of Eto’o, Messi, Deco, Xavi and Henry, and were without Nemanja Vidic.

Breaking down defensive minded teams had been our greatest challenge in the past, but here we were facing an attacking side that had some of the best players in the World on their books. Would we have the defensive maturity to overcome them, as well as the strength up front to get the goal, particularly without Wayne Rooney?

We did it though, and the feeling of seeing Scholes’ shot hit the back of the net and the final whistle blowing was the best moment Old Trafford had experienced in years and years. 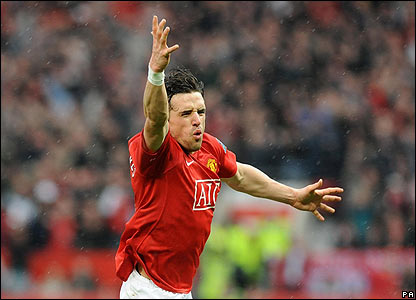 Beating Arsenal in the league

After beating Liverpool and City, I really do enjoy a victory over Arsenal. The fierce rivalry which really took off in the 1990s, with the league travelling from Highbury to Old Trafford on a fairly regular basis, was something I relished.

Before Arsenal won the title in 1998, the Premiership years before that saw us competing against a single team for just one or two seasons, with Blackburn and Newcastle becoming our title rivals. However, in the six years between 1998 and 2003, United and Arsenal filled the top two positions, with usually a fairly close battle ensuing until the end of the season, ensuring a sustained period of competition from another team.

Less than a month after battering them 4-0 in the FA Cup, we welcomed the Gunners back to Old Trafford in the league. There were just 4 league games to play after this meeting. A win for Arsenal would see them close the gap between us to 3 points, a defeat would see United go 6 points clear at the top and condemn Arsenal to another trophyless season, following their midweek defeat to Liverpool in the Champions League.

Adebayor opened the scoring just after half time, and from my seat at the other end of the ground, I couldn’t quite work out how he’d completely baffled our defence and keeper. Moments later, the texts starting pouring in making me aware that the lanky Togolese had scored with his arm.

However, just like two seasons before when Toure cleared the ball of the line with both his hands, only for no penalty to be awarded, Arsenal were not to be rewarded for their cheating.

Owen Hargreaves ball in to the box was blocked by William Gallas’ arm just over 5 minutes later. I couldn’t have chosen a better player to be punished, following his brutish behaviour in the Cup game going unpunished. Ronaldo scored from the spot.

Fergie wanted the win and sent on Anderson and Tevez immediately for Scholes and Giggs, to inject a stronger sense of attack in to our side.

Evra was brought down 25 yards out, with Hargreaves telling Ronaldo where to go, and stepping up to put away a sublime freekick. Just like Arsenal players celebrated as though they’d won the league at the beginning of the season, after drawing 2-2 at home to us, our players did the same. However on this occasion, it really did feel as though the league was incredibly close to being won.

Beating Wigan at the JJB

The task was simple. Beat Wigan away from home and the title is ours. Our opponents had nothing to play for, already securing their place in the Premiership next season, so surely nothing could stand between us and our title.

However, memories of the final day of the season in 1995 lingered, where a West Ham side who had nothing to play for deprived us of the title.

We had our minds put at ease when Ronaldo scored his 31st league goal of the season from the penalty spot, after Emmerson Boyce clumsily stuck his leg out in front of Wayne Rooney in the box. We really needed another goal to be entirely confident though.

When Chelsea went 1-0 up against Bolton with an hour played, the need for a second goal was emphasised. If Wigan got a late equaliser, that was it, the title was lost.

We dominated the possession and chances and with 10 minutes to go, took advantage of this. Rooney played a perfect ball through to Ryan Giggs, fittingly, who placed the ball perfectly. The look of shock and excitement on his face summed it up for all of us. He had put it beyond all doubt now, the Premiership trophy was staying in Manchester, and the fact Chelsea couldn’t hold out for a win against Bolton mattered little. 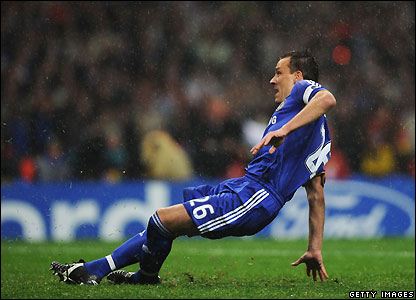 After Ronaldo missed his penalty in the shoot out, I was just waiting for a Chelsea player to make the same mistake. When the hateful Frank Lampard and Ashley Cole scored, with Hargreaves and Nani keeping us in contention in between, I held little hope that John Terry wouldn’t score. There was no one out there who wanted Chelsea to win more than him and it was gutwrenching watching him step up to the spot.

Just like a slip from Van der Sar had cost us an equalising goal in the first half, Terry fell victim to the slippy ground. The ball came back off the woodwork and it was the most joyful feeling since Solskjaer’s injury time winner at the Nou Camp. The European Cup wasn’t won yet, but it wasn’t lost either, which had been the overwhelming feeling in the seconds preceding.

The momentum was with us, as our players jumped for joy and Chelsea players crumpled. It surely wouldn’t be long now… 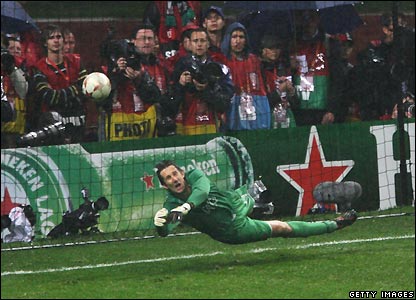 And the winner, unsurprisingly… Van der Sar’s save vs Anelka. The European Cup is ours!

Sudden death, and the young Anderson, who had yet to score a goal for United, strode up confidently after being subbed on just for this purpose. He struck the ball powerfully down the centre of the goal, running ecstatically in the direction of our fans, punching the air. Kalou made it 5-5 moments later.

Ryan Giggs was the next brave player to take the responsibility on his shoulders, sending Cech the wrong way. Next up, Anelka.

Both teams will have been watching tapes of the opposition players previous penalties, reading up on their favoured spot to place the ball. That’s why as Anelka stepped up, Van der Sar pointed to his left, the opposite corner, daring the Frenchman to take a chance, whilst knowing he was going to dive to his right.

“Nicolas Anelka, who has scored against Manchester United for Arsenal, Manchester City, Bolton and Real Madrid, he must score. Former Liverpool and Manchester City player, with the responsibility of taking this key penalty…VAN DER SAR SAVES IT! UNITED AGAIN, CHAMPIONS OF EUROPE!”

Van der Sar stood alone for a few seconds, after scrambling to his feet, his hands in the air, waiting for his team mates to join him, as they charged to celebrate.

“You see it coming, you save it and then you get up and you know the game’s over,” said our keeper. “You have two, three or four seconds on your own, arms in the air and everything goes through your mind. You see your team-mates coming and it’s just happiness; one of the greatest feelings you can ever have.”

Whilst winning the European Cup in any year, under any circumstances, would be worthy of being named as our moment of the season, there is so much that adds to our victory over Chelsea last season.

Coming 50 years after the Busby Babes lost their lives in Munich, 40 years after our first European Cup final win against Benfica, 2008 had to be the year for us to win it again. There has been an element of magic for United in our relationship with this trophy, following our entry as the first English team to the competition. The Babes could and should have won it in 1958, yet Sir Matt Busby managed to create another brilliant side just 10 years later. “We’ll never die,” we sing, this year more often than any recent season, which was epitomised by Sir Matt’s ability to create that Cup winning side.

Again, last season, despite looking down and out, we kept going, and even after going one kick away from losing, claimed the honour in sudden death.

Spend the next year immersing yourself in this victory because now, for the third time in our history, we are the Champions of Europe.