Anderson Happy About Ron & Watched Newcastle On The Net 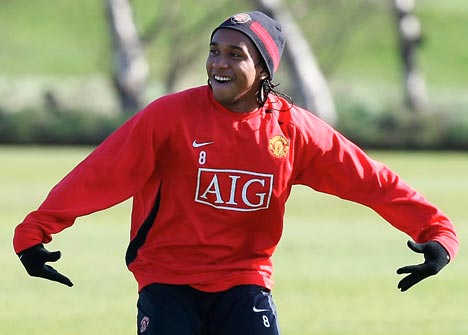 Anderson, who suffered a humiliating defeat at the hands of Argentina at the Olympics yesterday, seems chuffed to bits to be a Manchester United player. He had far more game time than anyone had anticipated last season and got some great performances under his belt, particularly against the trickier matches with Arsenal and Liverpool as our opponents.

Within days of the season starting, Anderson was round at Cristiano Ronaldo’s place with team mate Nani, getting down and dirty with a load of hookers. Nani had just scored the first goal of his United career, a great one at that, so what better way to celebrate? The three have seemingly be friends for life since.

Amderson has today reflected on his feelings over Ronaldo staying at United, as well as keeping up to date on our goings-on whilst he’s at the Olympics.

Anderson missed United’s 1-1 draw with Newcastle as he is away with Brazil at the Beijing Olympics, but kept up to date on the result “I followed the match on the internet and spoke to my teammates via email,” he said.

In regards to the title race, Anderson does seem to possess any psychic abilities. “Everyone is confident about our quest for titles this season,” he said. “I think the Premiership will be decided between us and Arsenal, Chelsea and Liverpool.”