Answer To Fergie's Problem: Who Would You Pick? 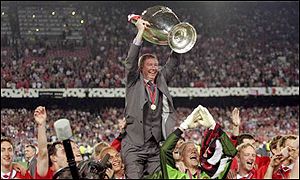 Manchester United will be playing in Moscow a week tomorrow in the third European Cup final of the club’s history. After securing a 17th league title on Sunday, our players will be eager to claim their place in the history books by adding a European Cup winner’s medal to their collection.

However, Sir Alex Ferguson has today admitted he is having some difficulty in deciding who should play in the final. With all our players now returned from injury, Fergie has to decide which players should make up his 18-man squad.

“I’m travelling to Moscow with 26 fit players, that’s unheard of in my time,” he said. “But it gives us an incredible chance. It makes it difficult for me. I think picking the team will be easier than picking the substitutes. I’m going to have to leave some fantastic players out of the squad completely next week, which I won’t enjoy doing, but something has to be done.”

Then who gets to make the bench? Will Hargreaves take Brown’s place a right back, forcing him to the bench? Whilst O’Shea, Fletcher, Nani, Anderson, Saha, Park, Silvestre, Pique, as well as Kuszczak, are likely to be the players fighting it out for a spot. But who deserves it? Will the likes of Fletcher and O’Shea get a place because of their connections with the club, sitting on the bench in the same way P Neville, Greening and Brown did in 1999? Or do the young, new talents of Nani and Anderson deserve to be played on the biggest stage? Louis Saha has barely played all season through injury, does he deserve to be on the bench? Or is it a case of it being common sense to have a striker available to come on, regardless of how little he’s played?

Which players would you like to see starting and on the bench for United against Chelsea?