Are You Happy To See Pique Leave For £3 million? 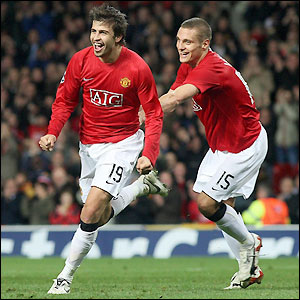 Manchester United have been incredibly solid defensively this season, claiming an incredible 21 clean sheets out of the 38 league games, as well as conceding just 22 goals. Rio Ferdinand and Nemanja Vidic have had a lot to say in that defensive record, both showing themselves as some of the best, if not the best, centre backs in Europe.

Vidic’s fearless nature, sticking his head or leg in to any dangerous situation to make sure the ball is cleared, has seen him pick up several injuries this season. During this time, Wes Brown, who has been filling in for an injured Gary Neville all season, has been moved to the middle, with the versatile Owen Hargreaves playing the full back role.

Gerard Pique has been overlooked for the majority of the season though, after returning from his loan spell last season. His costly error against Bolton at the Reebok earlier in the season saw us lose all three points to our failing neighbours, who sadly avoided relegation (although I will thank them for their late goal at Stamford Bridge which saw United escape becoming a statistic of a club winning the league on goal difference).

Pique did however get a few successful Champions League games under his belt this season though, scoring two goals in his three appearances in the competition, as well as defending solidly. He made a good show of himself for 90 minutes in our recent league victory over Arsenal, as well as making another 9 appearances for us in the league and League Cup.

Ahead of United’s crucial clash with Barcelona at the Nou Camp there was talk of Gerard Pique filling in for Vidic, however, Fergie spoke quickly to dispel these rumours. The manager believed it would be too much for the defender to return to his former club, who he still has much affection for, in such a vital game.

Today, reports in Spain suggest that Pique is ready for a move back to La Liga, with the deal supposedly going through after the European Cup final.

El Mundo Deportivo has today said that Barcelona are prepared to pay £3.75 million for their former youth player, if terms on a 4-year-deal can be agreed with the club. Apparently, Pique is happy with the salary they are offering and is eager to sign.

Whilst Vidic and Ferdinand and clearly superior to him, we are rather short on defensive cover if either of these two are injured. Wes Brown will more than likely resume his place on the bench next season, with the likelihood being a new right back will be signed this summer to replace Neville long term. However, after him, there is only Silvestre, who also might be departing at the end of the season, and John O’Shea who could fill in for our starting defensive duo.

However, Pique is no mug, and whilst progression in cup competitions might see his appearance total rise, he is sure to know he won’t be replacing Vidic or Ferdinand as a starter any time soon.

Would you be happy enough to see Pique leave in the summer?