Ole Gunnar Solksjaer’s unbeaten run in the Premier League came to an end at the Emirates after his side lost 2-0 to Arsenal on Sunday. Granit Xhaka and Pierre-Emerick Aubameyang got the goals for the Gunners on the day. Contributing writer, Nathan Quao, saw the game and put down his observations.

In the football world, there is the age-old concept that when chances are not taken by one team, the other team will take theirs. That is what happened to United at Arsenal on Sunday.

Man United were expected to fight and get a good result, especially with the hunt for the top four football in full swing. The draining night in Paris was bound to take a toll on the team but in a game where a lot was at stake, the opportunities should have been taken.

Lukaku’s effort that came off the bar was the first of several that did not go in. The Belgian had another attempt stopped by Leno when he attempted going around the Gunners’ goalie.

There were fine margins that prevented United from getting the result they required, but the truth is that certain players did not put in the required levels for a match like this.

Marcus Rashford did not get his decisions right on the day and some of them were huge in the context of the game.

For instance, after receiving the ball in the Arsenal penalty area in the first half, he fizzed a shot over the bar when perhaps, a good understanding of his surroundings would have produced a better effort from him. He needed to hit the target or play in a teammate.

In the second half, he turned his back on a sequence of play to sulk due to his frustration at not being given a pass earlier and he wasn’t ready when the ball eventually came to him.

Paul Pogba struggled to get going all game and he was handled by Xhaka well on the day.

Fred kept doing and undoing the good work he was trying to give to the team.

It was a very difficult afternoon for the team and there will have to be an admittance that the output was below par.

Bump on the road

No one thought that Solksjaer would go unbeaten all season and so a loss was to be expected, and then the result presents a chance to reflect and respond.

The manager admitted that the team was “lethargic in the first 10-15 minutes, did not have the zip and we did not take the chances.”  Such a statement only means that he will and should demand a lot more from the players in the subsequent games.

The hunt for top four football will travel the distance and with matches against Chelsea and Man City on the horizon, there is the need to find consistency in the performances and the instinct to finish the chances when they do come.

That is a very large part of the pursuit of a top four finish with the remainder being the hope of the other contenders dropping points along the way.

Not a lot can be done about the loss at Arsenal now. What can be done is to prepare for the challenges that lie ahead and start another good run of games.

If it has been done before, it can be repeated.

On the next one! 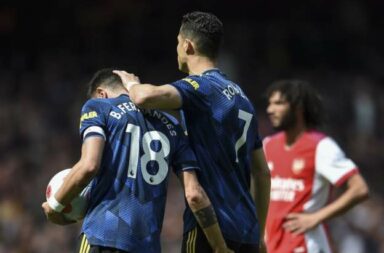