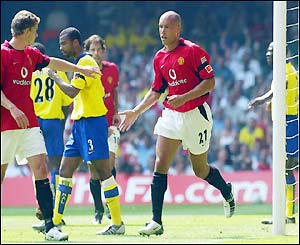 Back in May, I offered a fond farewell to Mikael Silvestre, realising that after returning from injury it was finally time for him to go. He’s been regarded as a bit of a joke at United for a long time, a player tolerated more than appreciated. He’ll have his good games, but will have at least five shameful performances to accommodate for each of these. He makes stupid mistakes and whether played as a full back or in the centre of defence, is caught out far too often.

However, he has been a loyal servant for United, probably spawned from the fact he knew he was punching above his weight when given a starting place at our club, which he had for several seasons.

It’s rather fitting that he will don the old shirt of another French defending joke, Pascal Cygan.

Like I said when I heard City were in the running to sign Silvestre, I do have a soft spot for him. He’s been at the club for 9 years, winning 4 league titles with us, and whilst never a brilliant player, he has done a job for us.

The overriding memory of Silvestre is probably the evening when he headbutted Arsenal’s Freddie Ljungberg. The usual docile defender seemingly lost the plot when confronted with Mr Calvin Klein, receiving the first and only red card of his career.

United had ended Arsenal’s 49 game unbeaten run earlier that season, in a game that saw Arsenal get away just one shot on goal, with Silvestre playing the centre of our defence alongside Rio Ferdinand. The away fixture was promised to be the occasion where Arsenal got their revenge, however they got battered 4-2 at Highbury.

With more than 20 minutes left to play, Silvestre was given his marching orders, with United 3-2 up at the time. Fortunately for us, John O’Shea sealed the points for us with a top quality goal.

A red card that day, it was an assist the season following, with Silvestre being the man to play a beautiful ball in to Rooney in our 2-0 win over them in 2006.

Of course, Silvestre has had more positive moments to outshine the occasion where he nutted one of the Premiership’s most dislikeable characters. Whilst frequently defensively weak, Silvestre has always offered a lot to the attack. In his second season, he ran 50 yards, taking on a couple of Panathinaikos defenders, before his shot was parried in to the path of Scholes for our third goal.

In the 2001-2002 season, Silvestre was one of the few players that could receive some praise for his performances, however, over the next few years Wes Brown was above Silvestre in pecking order.

His high points are definitely the goals he’s scored against Liverpool and Leeds, but since the arrival of Gabriel Heinze, then Patrice Evra and Nemanja Vidic, he hasn’t had a look in, with his playing time hampered further by injury.

The fact that Sir Alex Ferguson is willing to sell Silvestre to our supposed title rivals speaks volumes about Fergie’s opinion of Silvestre’s quality, as much as it does his expectation of Arsenal’s title hopes. Lest we forget, it was only a year ago that Fergie dug his heels in when it came to selling Gabriel Heinze to Liverpool.

“Mikael was a great servant and a wonderful professional. We wish him all the best at his new club and thank him for his service,” said Fergie.

Whilst I’ll find it weird to see Silvestre in an Arsenal shirt, I find the whole situation hilarious. Silvestre stopped being good enough for us years ago, and the fact Wenger would offer him a 2-year-deal is pretty amusing. I’m sure Arsenal fans will try and find the silver-lining to this, assuming that Arsene Wenger knows what he’s doing, but just a couple of days ago, I’m sure they would have pissed themselves at the idea of signing Silvestre.

“I’ve spent a large part of my career at United, the last nine years, and I’ll remember that time fondly but feel I’m ready for a new challenge,” said Silvestre.

He will offer them a much needed experience along the backline and maybe Wenger sees him displacing the apparently wonderful Gael Clichy, who has been blamed for Arsenal’s demise last season, from the back four.

“I never even thought about him but he is just the type of player we need,” said Arsenal hero Frank McLintock, who lead the club to the 1971 double. “He has bags of experience and won’t cost a lot as he is 31. Being French, he’ll have no trouble settling in.” Takes the wind out of my sails when it’s common practice to see them as a little piece of France in North London.

All in all though, a fairly funny situation for United fans, and I wish ol Silly all the best.