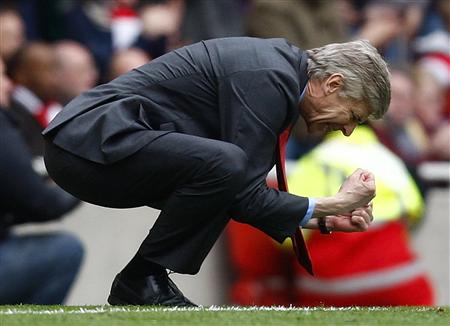 “What I believe is that the PFA players of the year decisions are all made in February,” said Wenger. “But February is not a really important time and that means the players who are rewarded are those who played well until February. Now is the most important time of the season – April, May – so I believe these awards just reward the players of the first six months of the season. A player who has been out until January has no chance to be voted but he can still be very influential for the rest of the season. If they vote in May I hope some of my players would be in there because that would mean we have done well tomorrow and later.”

In 1998-1999 Manchester United won the Premiership, the European Cup and the FA Cup, yet David Ginola, who had scored three goals by February, was voted PFA Player of the Year.

Of course you could look at all the other players who have missed out, but you could do the same every season.

In 2002-2003 season Arsenal were clear by five points at the end of February and Thierry Henry was the top scorer. By May, Gunner favourite Ruud van Nistelrooy was the top scorer in the Premiership, scoring a total of 44 goals for us in comparison to Henry’s 32, and United were Champions, five points clear. Strangely, I didn’t hear Wenger complaining about how the award was voted for then when Henry was claiming the PFA award.

It’s only when no Arsenal players get a mention, including the Young Player of the Year award, when supposedly Arsenal have bags of the most talented young players around, that Wenger suddenly has a problem with how the PFA awards are voted for.

I personally am not too concerned over who should or shouldn’t win this award. I’m not arsed about when it is voted for. Paul Scholes has never won it so how accurate can the voting actually be? But I do personally find it amusing that Wenger saves his complaint about the voting system the year Arsenal don’t get a single player nominated. How embarrassingly transparent.