Assisted One, Scored The Other - But Ronnie Not Tough Opponent? 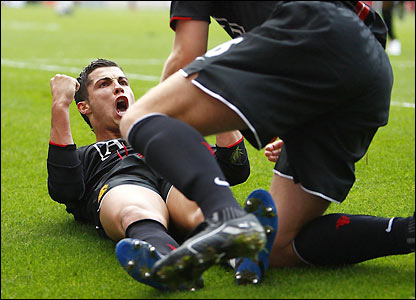 There has been a fierce rivalry between Manchester United and Arsenal over the past ten years or more with both teams regularly competing for the league title. Since Wenger joined Arsenal, they have won the league three times, compared to the six league titles of Sir Alex Ferguson in this same time period.

There have been several great clashes when these two teams have met, both spurning the other’s league and cup ambitions several times.

The greatest encounter in recent years was the match played at Highbury in the 2004-2005 season, when United had earlier ended Arsenal’s unbeaten run with a 2-0 victory at Old Trafford. The match started with a fiery confrontation between captains Roy Keane and Patrick Vieira in the tunnel.

Vieira put Arsenal in front after just 8 minutes, only for Ryan Giggs to equalise 10 minutes later. Arsenal went in front yet again, this time Denis Bergkamp finding the back of the net. In the second half, Cristiano Ronaldo dished out crushing blows to the gooners, drawing us level on 54 minutes, then taking us in to the lead 4 minutes later. With 20 minutes remaining, Mikael Silvestre was sent off for headbutting Freddie Ljungberg and Arsenal pressed for the equalising goal. The next goal of the game went to United though, as the team with ten men won 4-2 at Highbury, John O’Shea the surprise scorer of a fantastic goal.

Last season, it was Arsenal’s turn to do the double over United, beating us 1-0 at Old Trafford courtesy of a late Adebayor goal, as United squandered the lead at the Emirates, with Henry and van Persie both netting late on, denying United of any points.

The teams have already met once this season, United leading 2-1 until injury time, when William Gallas stepped up and made amends for his earlier own goal. The game finished 2-2 and the Arsenal players carried on as though they’d won the Cup.

Gallas has given an interview in which he blasts United, calling us arrogant and complacent. He also dished out criticism of Cristiano Ronaldo. “It was not easy against him,” he said, “but it was not that difficult either.” Rather odd comments to make, considering Ronaldo scored one goal and assisted the other in our 2-2 draw at the Emirates.

Is Gallas right to criticise Ronaldo? Or do you think Ronaldo will make Gallas pay for such dismissive remarks today?