Mikael Silvestre and Louis Saha are both likely to be making a move back to their homeland this summer, with the players today admitting they don’t have much of a future at the club.

Whilst Saha’s club of choice is yet to be confirmed, it appears as though Silvestre is looking for a move to Bordeaux. “I know Lolo (Blanc) as we played together at Manchester. Last year, we talked about a possible transfer,” Silvestre revealed. “So it is not impossible. Now I have to think about it. Bordeaux is the club in my heart.” 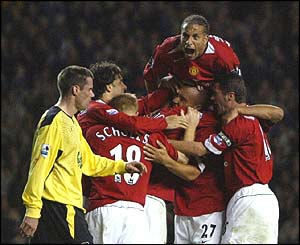 – More starts than any United player 2002/2003
– Winning goal vs Leedscum 10 minutes from time
– Both goals against Liverpool in our 2-1 win
– Nutting Ljungberg in our 4-2 win at Highbury, the only red card in his footballing career