Barcelona Tonight: Predictions From The Stars 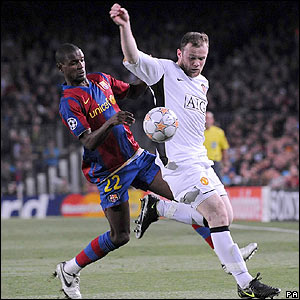 “The first thing is I trust these players,” he said. “I’m happy for them to represent Manchester United in any shape or form, in any game. I think I’m a lucky manager to have such good lads. Character-wise, they’re fantastic. You saw that in the second half against Chelsea when they were absolutely magnificent. Silvestre has only had one game in nine months, Fletcher had been out for several weeks. That character is a part of Manchester United. It epitomises the kind of player who needs to play for Manchester United and I’m absolutely proud of the players who’ll be representing me and the club tomorrow night.”

“It is a European Cup semi-final at Old Trafford, that’s why you become a footballer,” he said. “These games don’t come around too often, so you have to go and make the most of it and enjoy yourself. I am sure we will. Every player is looking forward to this game. It is a massive match and we will be up for it. You have to do what you do best. If you are a defender, defend. If it is attacking, taking on players and scoring goals, do that. We defended brilliantly against a very good Barcelona team last week and have to do the same again. With the crowd behind us, we are noted for our attacking play and creating chances and I am confident we can do that.”

“Yes, I firmly believe that we are [favourites] because we are playing as well in the Premier League as we are in Europe,” he said. “Barca have a great team, with players such as (Lionel) Messi, (Thierry) Henry and Deco, but it is true that they are having problems winning league games because of inconsistency. Manchester United are a lot better, despite what happened at the Nou Camp.”

“I am convinced that [Tuesday] can be a great day for Barcelona, but to achieve this Barça will have to impose their own style,” he said. “At Old Trafford there is no favourite… the basic rules to follow are the same as in the first leg at Camp Nou: no nonsense (such as Milito giving away a penalty), don’t lose horizontal balls (Iniesta lost one and almost cost a goal and no being locked in. But can Barcelona play as they did at Camp Nou – that is to say, always in the rival half, pushing and stealing? Not only can they, but they should. But they need to improve in one aspect: the pace of the ball. That’s what determines the depth and space you create.”

“The fear is with them now,” he said. “They know if they concede at home they will have to score twice to win the semi-final. I’m optimistic. In the first leg Messi had a lot of players on top of him when he received the ball, but he still caused problems. Now they have to attack us more and they will not be able to concentrate so much on covering Messi. When I saw that Tevez, Rooney and Ronaldo were all starting on Wednesday, I thought they would pressure us high up the pitch. But they defended quite deep and can’t do that at home.”