Bardsley: I Was Right To Give Up United Dream For Sunderland Move 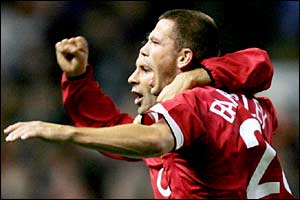 Of course every red wanted Phil Bardlsey to be a success at Manchester United. A Salford lad ready to replace Gary Neville when he retired, who had been in our ranks at the club since he was 8-years-old!

Sadly, it was too good to be true, and whilst the story sounded perfect, Bardsley’s ability wasn’t, and just over a year ago he was sold to Sunderland.

Bardsley has today explained why he made his decision to leave, as well as revealing his confidence in United retaining the title.

“I think I made the right decision to leave United,” said Bardsley. “You can hang on to the dream of establishing yourself there for too long, and you can end up going backwards if you’re not careful. It was the right time for me to leave, and I haven’t looked back since coming here. I’ve established myself here at Sunderland, and it’s every kid’s dream to play in the Premier League. I’m no different. I had a great time at Man United, but it was time to move on, and coming here has given me the chance to play week-in, week-out, and prove myself.”

Bardsley has reflected on United’s season so far and his predictions for what will happen in May.

“United had a tough start to the season, but it was hard to really assess the table because they had games in hand a lot of the time, because they were away for World Club Championship,” he added. “But they’ve got top players and a great manager in Sir Alex Ferguson – they’ve been in this situation many times before, and they know what they have to do. They know what it is like to win titles, and I’m sure they’ll do it again this year. Sir Alex Ferguson has done a great job for that football club, and produced team after team of fantastic players. People have kept asking ‘how will he improve on this team’ but he has always managed to produce another even better side. He’s got young players like Rooney, Ronaldo and Anderson, but there is also a core of more experienced guys like Ryan Giggs, Paul Scholes and Gary Neville.”