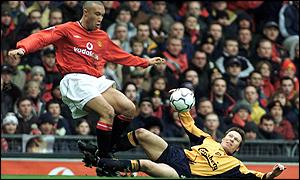 Hull midfielder, Nick Barmy, once said he would never play for Manchester United. Turning out for Everton as their all-time most expensive player at £5.75 million, he attracted attention from all over the Premiership. Everton offered him a new deal, which he rejected, saying he wanted to join Liverpool instead, also shunning United’s interest.

He signed for Liverpool at the peak of his career, and scored an impressive two goals in their infamous Mickey Mouse treble year, but he was soon shipped off to Leeds following a bout of injuries and poor form.

So, now that Manchester United have come in for Jack Barmby, it seems he wasn’t keen for his son to make the same mistake!

Barmby Jnr, apparently one of the brightest prospects in English football, has moved to United under the guidance of his father, two years short of signing a professional deal with Nick’s beloved team, Hull City.

Jack, who plays on the left wing like his old man, made his debut for the academy last Saturday.