Benitez's Words Come Back To Haunt Him 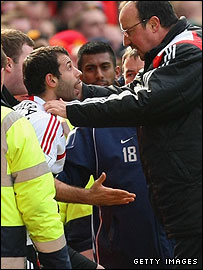 March 22nd: “I don’t know how interested United were in him last January but they have signed two or three players in his position, sometimes paying more money than we did for Mascherano. We are happy with what we have. I don’t know if United are happy but we are. Javier has a fantastic mentality. He’s a top player who can be a key figure for us over the next few years.”

March 23rd: Hargreaves, Carrick, Anderson OR a player who can’t bite his tongue and gets sent off in the biggest game of the season? It’s a tricky one. I will get back to you.

You don’t know if United are happy? Yes, Rafa, we are very happy.

Fantastic mentality? You mean, when he’s swearing at referees, charging from yards away to question decisions, and sarcastically applauding every decision he doesn’t agree with? Doing this continuously for 44 minutes to the point where it was pretty clear he had a red card hanging over his head, and it being a question of when rather than if he was going to be sent off.

Am I the only one who is glad karma has come around to bite Mascherano in the arse, after the FA allowed him to get away with no punishment following the incident with Aliadiere?

Despite Benitez’s claim, that things were “50-50 before the sending off” (I mean, considering Van der Sar hadn’t made a

save a United were 1-0 up, it hardly takes a genius to see the situation wasn’t “50-50”), Mascherano’s sending off probably did little to the effect of the result. Liverpool’s midfield was non-existent during the first half and their attack did not test Van der Sar once. However, his mentality is something that needs questioning, and as a United fan, I’m far happier he was playing against us than for us today.

Do you wish we’d signed Mascherano?