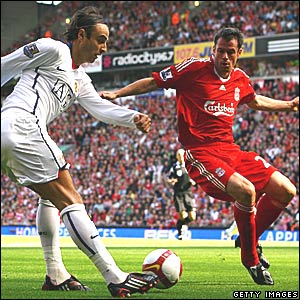 It looked as though it was going to be a brilliant Manchester United debut for Dimitar Berbatov yesterday, having a penalty appeal wrongly turned down and assisting a goal within the first three minutes.

After a summer of speculation, Sir Alex Ferguson had finally got his man. Whilst there was no denying his ability, his mentality was questionned. He’d developed a reputation as a sulk and fans wondered if we needed someone like that at the club.

Sir Alex Ferguson has today spoken out in Berbatov’s defence, claiming he isn’t sulky, rather just eager to play.

“I have spoken to a lot of people about Dimitar and I don’t know why he has that reputation for sulking. It’s a load of rubbish,” said Fergie. “They tell me he is very quiet. Maybe he doesn’t like being left on the bench. But that’s good. In that sense he is like Eric Cantona but the thing to do is make sure you are not on the bench. Dimitar has an aura about him and a quiet arrogance that tells you he is very assured about himself.”

Ferguson has also heaped praise on the new striker, claiming his presence offers us a different line of attack.

“He gives us a very different threat in the air which we haven’t had since Teddy Sheringham and Dwight Yorke and, before that, Cantona,” he added. “We have not had a centre-forward who is a really good header of the ball for a long time. He also has a composure about him and a calmness in the last third of the field where he can pick the right pass.”