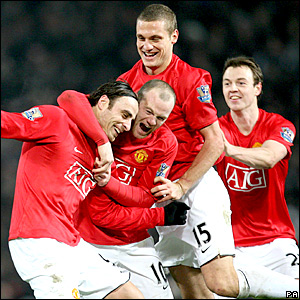 Whilst later denying the comments had anything to do with him, Nemanja Vidic was reported to have a go at life in Manchester. He now feels at home apparently, but the initial comments didn’t go down well with us. By and large, us Mancs are fairly precious about our city, hailing it above any other, so didn’t appreciate these comments which tore a strip off us about it.

Dimitar Berbatov knows how to keep us sweet though and has claimed that despite the weather, he prefers life up north to the south, and is loving life at Manchester United.

“People talk about the north and the south but I don’t make comparisons like that, I am just interested in my football,” said Berbatov. “People says it is not sunny here and it rains all the time but that doesn’t bother me. I like it the way it is. In fact, I like it better here. I am not a guy who looks for places with a lot of people and traffic. London was crazy anyway, so I used to live out of town. Here it is more peaceful. But the city is secondary to the team I play for. Now I play for the biggest team in the world, so it doesn’t matter where I live. I am very happy and things are going well. My dream was to come here, now I can see how the biggest stars are working and I can compare and measure myself against the best.”