Berbatov: Who Cares About Goals? Three Points All That Matters

Dimitar Berbatov picked up on illness on the way to Japan meaning he made the journey over there but was unable to play. Sir Alex Ferguson claimed the trip had several benefits, including how well it had allowed the team to bond.

“It was terrific for the unity of the team,” said Fergie. “I think the players all enjoyed their time together. When you’re at home in England you tend to go off in different directions after training. Some players go home early after training, some hang around to practise, some linger around the canteen having their lunch. There are all different ways they behave regarding their lifestyles. But when they’re all away for a long spell like we’ve just been, they’re together, they communicate very well, and that’s more important than anything. There was a fantastic atmosphere among the squad.”

Berbatov seemed to be bringing smiles to his team mates faces, after initially being a bit of a loner when he first joined the club.

“We are having a lot of 1-0 wins but sometimes it is because we are missing a lot of chances,” said Berbatov. “You lose your concentration sometimes and the teams we are facing are defending very well. Middlesbrough were very good on Monday night. It would be nice to get a second or third goal but 1-0 is enough. You still get the three points. We are not really worried about it, but maybe we must work on our concentration in the final third of the field. The boss tells us all the time not to lose our concentration because it will be very important in the crucial games coming up. So we will keep working on that and as long as we keep making chances, hopefully the goals will come.”

Lest we forget, in our opening 10 games last season, we scored just one goal or less on 9 occasions. The most important thing at this stage has to be collecting the points and keeping the pressure on Liverpool and Chelsea.

Clearly, we’re creating the chances, we’re just not putting enough of them away. Whilst I’d rather us win 3-0 every week, I’ll take all the points we can get at the moment. If we go on to win the league by winning 1-0 every week, I won’t complain. However, I do feel we’re just waiting for things to click. Once we get Chelsea out of the way, we’ve got a run of fairly easy fixtures. If we just relax, start putting away our chances, then our confidence should grow and grow over the next couple of months. 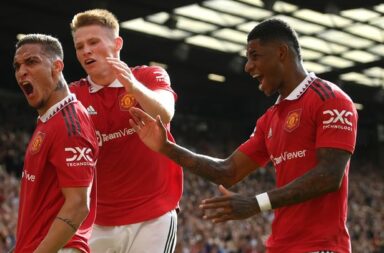