Blast From The Past: Arsenal Tunnel - Does Keane Want Bottler Vieira? 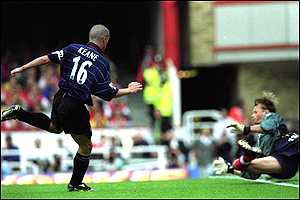 I’m starting to wonder if every time Sunderland and Arsenal play, Roy Keane will be interviewed on his feelings towards the Gunners when he was a Manchester United player.

There is no denying that the rivalry between these two clubs was something special, with both sides playing attractive football, both sides disliking the opposition’s players, and both sides fighting it out for the title. It was brilliant. The United vs Arsenal games weren’t just something the club’s fans looked forward to, but fans of all clubs up and down the country.

Our captain throughout the most heated times with Arsenal, Keane, has summed up those feelings well.

“They were great occasions against Arsenal,” he said. “It was a battle, the tensions between the two teams, between the managers, the two clubs — brilliant! Absolutely brilliant! By God, you looked forward to those games.”

The 2004-2005 season really spiced things up though. Yeh, there had been brawls on the pitch in the past, there had been controversial decisions, but nothing was comparable to the matches in this particular season.

Just one game short of getting their pleasing on the eye, 50 games unbeaten, United spoilt their party, beating them 2-0 at Old Trafford.

Arsenal fans have lots to say about the penalty decision, which saw United go 1-0 up, but are unsurprisingly quiet when you remind them they only had ONE shot on target all match and that United scored a second goal.

Still, far more embarrassing than any team ending their unbeaten run was the response of their players. Banter between the players and fans is enjoyable, but a line has to be drawn. That line comes along way before jumped up little kids decide to throw pizza at the most decorated and respected man in English football. I can only imagine what Sir Alex Ferguson was thinking when 17-year-old Cesc Fabregas decided the best way to respond to defeat was to throw a slice of pizza at our manager. What a total cunt. (No seriously, he really is a cunt)

It was only fair then that when we returned to Highbury, we’d try our hardest to humiliate them. No, we wouldn’t resort to classless food fights, we’d go out to embarrass them on the pitch.

Heart beat racing, United and Arsenal fans alike watched the players lining up in the tunnel, when suddenly a commotion broke out. An Irish accent, effin and blindin, can be heart clearly, as Graham Poll makes his way back up the tunnel to sort it out.

Next, Patrick Vieira starts barging down the tunnel, shepherded out by team mate Pascal Cygan. Dennis Bergkamp then comes to console Vieira, before Roy Keane makes another appearance. Leaning over Poll’s shoulder, he points to the Arsenal man, “I’ll fucking see you out there!”

Now this was a moment that still feels United fans with pride and excitement. Here was our captain giving it to Arsenal’s, showing him he had no fear, whilst Vieira sheepishly turned his back on Roy.

Out on the pitch, Keane, Paul Scholes and Wayne Rooney all refused to shake hands with Vieira, whilst Gary Neville took hold of his hand firmly, staring at him, whilst Vieira again looked away.

How does Keano remember it all?

“It was just the battle, the tensions between the two teams, the two managers, the two clubs,” Keane said. “It was brilliant. Someone had a go at Gary Neville coming in from the warm-up and I thought it was out of order. I had to defend my team-mate. You don’t go around threatening people in the tunnel. You defend yourself, particularly away from home. You don’t win games in the tunnel, though. You might lose them. We still had to go out and win. I think we won 4-2.”

Oh he thinks we won it 4-2 does he? As much as I would love it to be genuine, that nonchalance doesn’t wash with me. Keane is a born winner and there’s no way he’d put a 4-2 scalp out of his mind, no matter how long it had been. In his autobiography, he recites moments in matches and scorelines from when he was just a kid, playing against his biggest rivals. He will know full well what the score was that night at Highbury.

It appeared as though United were in for a tough night, that Keane’s over-pouring emotions before kick off were going to cost us. Vieira put them 1-0 up with less than ten minutes played, looking as though he had won the mental battle Keane desperately had wanted to take charge of.

Ten minutes later, Ryan Giggs evened the score, and we knew we really had a game on our hands now. However, before half time, Denis Bergkamp put the home team 2-1 up.

However, less than ten minutes after the restart, 19-year-old Cristiano Ronaldo made it 2-2, before putting us in the lead 5 minutes later. Incredible! This excitement was short lived though, with Mikael Silvestre having one of his ‘moments’ and nutted Freddie Ljungberg. What the fuck? This moment was always funny in hindsight, thinking of Mr Calvin Klein shitting himself over his modelling career.

“He butted me on my nose, and it bled,” he said after the match. “I got really angry but tried to keep calm.”

Now that Silvestre is an Arsenal player, this event is even funnier.

Anyway, the best moment for comedy value is yet to come. There were 20 minutes left to play and we were down to 10 men. Ronaldo was sacrificed, with Wes Brown coming on to sure up our defence. After working so hard and playing so well, were we really about to blow it all now?

Oh no, certainly not if Johnny O’Shea could help it! Gabriel YSB Heinze bombed down the left wing, as Cesc Fabregas slid in with both feet, missing the player and the ball, and so gave up the fight, jogging back instead of busting a gut. Heinze played it infield to Louis Saha, but with four Arsenal men behind the ball, surely there was no need to get excited.

Saha played it back to Wayne Rooney, who played a defence splitting pass to John O’Shea. What the hell he was doing loitering outside the Arsenal penalty area, I’ll never know! He took his first touch with his right foot, before lobbing the goalkeeper with his left. His expression was as much of shock as anything else. Did I just do that?

The game finished and United were ecstatic. All their players’ promises of ‘getting revenge’ for us ending their unbeaten run amounted to nothing, after Patrick Vieira bottled it in the tunnel. He went on to have an average game, whilst Keane was a good shout for man of the match.

With Keane making a good start of his managerial career with Sunderland, his transfer policy can be summed up with the following: Irish player, ex-United players, and more recently, any player who has played in the Premiership before.

So, it means Patrick Vieira fits the bill, but would Keane ever want a player he quite clearly despised at one time playing for his team?

“He was going on and on about the charity work he was doing in Senegal,” Keane once said. “So I said to him “if you love Senegal so much, why don’t you fucking play for them? It makes me laugh, players going on about how they are saving this country and saving that country but when they have the opportunity to play…well, it’s probably none of my business.”

Have Keane’s feeling changed any since then, making him interested in signing Vieira?

“Not when I found out his wages!” Keane responded. “How great is he? I don’t know. I don’t go down that road. I just know he was a bloody good player. He had good leadership skills, too. But not as good as mine!”