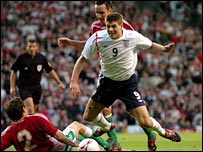 Long before Cristiano Ronaldo, Didier Drogba or Steven Gerrard were diving in the Premiership, Robert Pires was perfecting the art for Arsenal.

His most famous dive arguably came towards the end of Arsenal’s unbeaten season, where the penalty he earnt with a dive saved Arsenal from defeat, and kept their record in tact.

The likes of Gerrard dive all over the place, but then pretend he is entirely innocent. “None of that here,” he once claimed he’d tell a team mate if he saw them diving. Pires was exactly the same, diving here, there and everywhere, and after the game, Wenger would claim he didn’t see it.

Rooney also explained his actions, saying, “I thought I was going to get kicked and tried to ride the challenge.”