Bournemouth 1-2 Man United: What We Learned

Manchester United reprised their winning ways from the previous round and got a 2-1 victory at Bournemouth on Saturday. Anthony Martial and Marcus Rashford got the goals for the Red Devils after they fell behind to a Callum Wilson goal. Contributing writer, Nathan Quao, picks the main talking points from the match.

Not for the first time this season, the Red Devils had a first half to forget and this column had also written extensively to the situation.

The start of the game saw Bournemouth showing more heart, more fight, more desire and a better appreciation of the day while Man United struggled to get going.

A 4th  minute chance for Ryan Frasier was the best indicator of the statuses of the two teams.

Errors were committed easily with Chris Smalling making the costliest as his run towards his own own goal for the Cherries’ opener was late.

The other members of the guilty party were Ashley Young, Alexis Sanchez, Juan Mata and Fred.

Despite the equaliser from Martial, it was very evident that Man United were second-best and the manager, Jose Mourinho, said after the game that he “was the luckiest manager in the league in the first half.”

If the poor starts were initially seen as an aberration, they have now become a near-certainty when Man United play especially away from home.

Something has to change with the Red Devils and the change has to be quick. More complex matches are on the horizon and the opposition is getting better and better.

A time is coming when an underwhelming first half will be punished thoroughly and there will no chance for  redemption.

Despite the challenges of the first half, the team got it together in the second 45 minutes and the manager employed solutions which proved very helpful.

Ander Herrera changed the midfield dynamic and that helped Paul Pogba to complement the attackers.

Jesse and Lingard and Marcus Rashford brought some life into the hunt for goals on the day.

But these changes also highlighted the fact the starters- Alexis Sanchez, Juan Mata, and Fred- failed to glitter for the team.

Mata was not his usual smooth self and Sanchez could not get into very dangerous spaces very often to destabilise Bournemouth’s defence.

Fred fell short of last week’s very decent showing and it became clear that his use on the right side of a midfield 3 was affecting him and the team.

The manager does get credit for turning things round but the players need to take responsibility and try to work out solutions to the challenges on the pitch.

Staying focused on the game will ensure that passes are better completed and runs are made at the right time to provide openings and opportunities.

The good and bad of Rashford

The good: Being in the penalty box and being aware of the ball as it bounced around from botched clearances. This led to the match winner in the 91st minute. The patience to  hang around and finish the chance off was admirable and if his stick will rise, he needs to build his instincts really well.

The bad: Failing to find the net with Asmir Begovic out of the picture. The Man United forward, instead, hit the ball straight at Bournemouth defender, Nathan Ake when a little subtlety and a huge awareness of the area would have provided the tools for a goal.

Rashford, is seen by many, as the future of the team and thus, needs to apply himself and get minutes.

However, in the current state of things, wasting chances is not the best route. At 21 years, Rashford ought to possess instincts that are constantly being honed by his coach and himself.

He does have great pace and that, in itself, is a wonderful asset but poor decision making is slowing his progress. That should concern he and the coaching staff at Old Trafford. 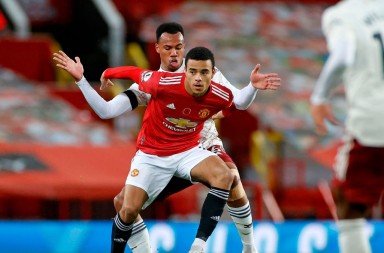