After the high of beating Arsenal at Old Trafford, Manchester United were beaten 1-0 at Brighton and Hove Albion on Friday evening thanks to a goal from Pascal Gross in 57th minute and contributing writer, Nathan Quao, points out a few things from the tie.

The demons made a strong return

The words ‘slow start’ and ‘lack of urgency’ have appeared a fair few times this season when Manchester United have been mentioned and again tonight, those same themes struck back like the Empire.

For a team chasing a target that the manager has often stated, it was really shocking to see that there was not of efforts from the players to get the needed result and bring that target closer home.

Of course, the counter argument will be that Brighton were tough to beat and they made life difficult but then, what else are they to do? It is the class that players of Manchester United that should unlock such stubborn teams.

However, that was missing. It took the team almost an hour to get into a recognisable tempo and even after that happened, nothing worthy of note was created to bother Brighton.

Has fatigue set in? Do the players feel that second place is already won? Did they underrate Brighton? Whatever the answers may be, Man United were just off.

With Romelu Lukaku out, Marcus Rashford was given the chance to play as the main striker against the Seagulls but he did not fare well.

His decisions were not of the highest quality and it further complicated an attack that was lacking in ideas.

There were moments when he was too eager to get on the bike and run when staying put and assessing the play before deciding on an action would have made a lot more sense.

His display did would not have helped him in his quest to get the number 9 role.

But he was not the only guilty party.

Anthony Martial failed to get his calls right on a very consistent basis too. His crosses were poor and the acts of dribbling into dark alleys were very common to see on the night.

However, these players should get more opportunities especially as they seek to grow and develop.

They should be supported in every way possible but on the flip side, they should perform such that the manager will be in torment if he has to keep them on the bench.

The regulars like Paul Pogba, Nemanja Matic, and Ashley Young did not cover themselves in glory either. They must do a whole lot more in the final weeks of the campaign.

Second place and FA Cup still on the horizon

The season may have only one week left in terms of the calendar but Man United’s exertions extend to May 19. There are league matches against West Ham and Watford and an FA Cup final against Chelsea still to come.

This means that work is still in session and there is no time for slacking off.

The taste for victory and some good momentum is needed for a very strong finish for second place and the FA Cup.

The loss at Brighton must be forgotten but not without an assessment and the assimilation of lessons.

Next on the schedule is a difficult match at West Ham who will not back off until Premier League safety is attained.

That means the emotions will be high at the London Stadium and as this season has shown, the Red Devils have not handled charged atmospheres very well.

Preparation is key and proper execution is needed if there will be victory else a potential last-minute scrap with Liverpool over second place will emerge. 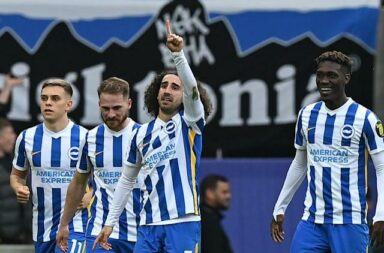