Burnley 0-2 Man United: What We Learned

Manchester United responded to their home loss to Tottenham with a 2-0 away win at Burnley on Sunday. Belgian forward, Romelu Lukaku, scored twice in the first half and contributing writer, Nathan Quao, of Citi Sports, Accra, Ghana, highlights the lessons from the tie.

After the lows of round week 3, the Red Devils had to find a good result at Burnley and they managed to do so without major challenges.

Burnley was not expected to be at their best especially after their exertions on Thursday in the Europa League but any team hosting Man United will be pumped up for a good showing and Burnley were in that category.

But they could not ask too many questions as the Red Devils scored twice.

The team showed calmness and security when moving the ball around and they were assured in their defensive positions. They had to be very measured knowing that Burnley would seek to thrive on crosses and aerial situations.

When it was time for full-blown offence, the players were willing to create openings and opportunities for goals.

It was pleasant seeing that there was the urge to seek out the enemy and see if the tally could be increased. All-round good performance on the day.

The performance of the team at Burnley should have been rewarded with a far bigger scoreline than 2-0.

As the Clarets went forward in pursuit of getting something, Man United went down the other way and sought more goals but a combination of poor passing decisions, indecisive posture and Joe Hart in post for Burnley prevented it.

Paul Pogba should have done better with the penalty but in the same vein, Hart should be credited with a good save. Lukaku should have finished his chance off after rounding Joe Hart late in the game.

The Belgian cannot get off the hook like Pogba. He had done the difficult part of the task and gotten past the goalie. The next step should have been the finish but that did not happen.

Lingard also had his moments when his choices in terms of passing on the break nullified the chances.

The season is a long one and there is the need to to rake in the goals when the chances present themselves.

Not only will they make a statement to the other teams but they will act as a buffer in the event that goal difference will come in handy.

Man United, of all teams, should know this fact all too well. Maybe the players may not be aware of the 2011/ 2012 season. If that is the case, they need to watch the tapes and learn the lessons. More goals need to be scored. Alexis Sanchez and Marouane Fellaini are not the most popular of players at Man United but against Burnley, they showed their good sides very well.

After a shaky start, Sanchez got going and became an important part of the attacking sequences as more spaces emerged in the Burnley armour.

He worked the wide areas brilliantly and he was the outlet and the dynamo needed to play on the break. From this performance, he has to aim higher and get back to his form for Arsenal. If that happens, the team will benefir massively.

For Fellaini, he showed a very different side of his game at Turf Moor.

While he may have been deployed to respond to the home side’s tendencies of using the air as their preferred route, he showed very good technical abilities with his feet.

He retained possession with ease and he even pulled out the odd dribble to free himself from tight spaces. It was a performance that probably served as a reminder of the Belgian’s other capabilities and he should be able to repeat the tricks again when need be.

Marcus Rashford, though, had an afternoon to forget but at the same time, it was a day of learning. Despite getting fouled by Bardsley (who should have been carded anyway), he rather got into a mix and get a deserved red card for headbutting Bardsley.

Some, including the manager, believe the decision was harsh but if Richarlyson got his marching orders a few weeks ago, Rashford is not more special.

However, he will have to understand that reacting like that in the full glare whether you are the offender or victim will attract a punishment.

More calmness is needed and more maturity needs to come to the fore. He will certainly be more measured next time but he has to fully grasp the lesson that one wrong move will bring a decision that could affect the collective.

Today, the team was already two up when he was sent off. At another time, an exit could come at a far worse time at a greater cost. 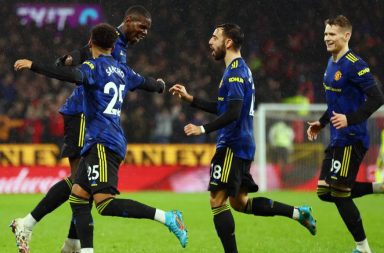