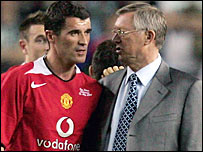 I was one of the fortunate 69,591 fans to be at Old Trafford tonight. My tickets were in the South stand, and although I’ll usually do anything to avoid that stand because of the lack of atmosphere, I was happy with what I could get today!

I was in town nice and early. By 6.30pm St Peter’s Square was all green and white. I’d heard from a few people they’d been in town since 10am. Got to The Trafford for 7, for a quick pint or two, and it was almost unrecognisable. Apart from the fact not everyone was wearing red, there were bottles and plastic cups for as far as the eye could see, carefully balaned to fill the tables, and then scattered all over the floor, people had obviously meant business!

Walked in and there was banter between both sets of fans. Until a group of Irish lads started singing “We hate Chelsea more than you!”Left the pub, green and white, red black and white, flags everywhere, with Keane’s mug on the front of them. Plenty of “Hail hail” chants from the Celtic boys.

Got in to Old Trafford, and I felt like I’d never been there before. The enormous North stand, filled with away fans, in front of me, and even more away fans to the right of me.
The noise was absolutely deafening, both sets of fans competing to be heard. Everyone was on their feet. It was just incredible.

It’s strange. Of course we’ve all missed Keane, and there have been more than enough times this season when we’ve been desperate for him, or someone with his presence, to be guiding forward our midfield. But I hadn’t realised just how much I’d missed him before today.
In the 2nd half, when he came out in red, there was something pretty magical. He’d been almost non-existent in the 1st half for Celtic, and because I don’t watch Scottish football, I figured he’d just lost it. But I was wrong. His passing for United in the 2nd half was spot on. Him and Scholes linking up, playing through Giggs or Ole. I felt like I was 18 again!

It really was just a great evening. Even Manchester’s skies decided to hold back on the rain and give us beautiful sunshine. On leaving my seat, the Celtic fans were leaning over the barrier and shaking hands and patting the back of every United fan walking past. Something not even close to what I’ve experienced on sitting anywhere near away fans before! But it hit me, all day it had been on my mind, just HOW important this man was, to us, and the Celtic lot. He embodied everything great about United. Skill, strength, passion, ability… and of course, dealing out a bone breaking challenge every few weeks.

Roy Keane was a special player, and the memories of games where he’s made all the difference to us seem never ending. Even when he didn’t play well, he could give us the edge that would win us a game.

Seeing him there, in the red and black for the last time ever, really was strangely moving. As he walked off the field at Anfield all those months ago, none of us had any preparation as to what was going to happen. But now, all those in red knew this was the last time we were going to see him making the difference for United.