Can We Have a Happy Christmas With Kuszczak? 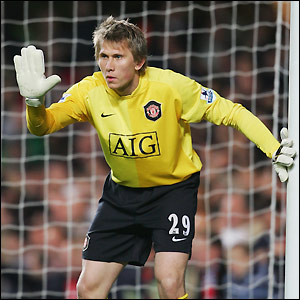 United deserved every one of their three points today, despite enduring a nervy final ten minutes to the match. Everton started the game well and gave us a fight in the first half, but in the second half, United were dominant in every area of the field, with the blues hanging on for their dear lives. Unfortunately for their travelling fans, who came with the ever popular “Die die, Rooney Rooney, die” and “Manchester is full of shit” chants, Pienaar was on the field, and didn’t know what to do when Giggs burst in to the box. So Ronaldo, for the fifth time this season, scored two goals, and the three points were ours.

Everton were the in form team before their trip to Old Trafford, going unbeaten for thirteen matches. Phil Neville lead out his new team proudly, but knowing all too well that United would have too much quality for Everton. Despite suffering the injuries of Van der Sar, Gary Neville, Rio Ferdinand, Owen Hargreaves and Paul Scholes, all of whom are first eleven players, we looked pretty solid. I was confident of a win from the moment of kick off.

However, unlike previous occasions on the park, Danny Simpson struggled with the pressure of today, and looked out of his depth. The only reassurance is Gary Neville looked out of his depth once upon a time, and has proven to be one of our most reliable defenders of all time. Simpson’s confidence will grow, and with it hopefully, his ability. He was at fault for the first goal, unable to handle Pienaar by himself, leading Wes Brown to leave his man in the box, only for the cross to get in and Tim Cahill to out jump Evra. Gutted.

The most striking error(s) of the game don’t go to Simpson though, it is goalkeeper Tomasz Kuszczak who takes that award. He can’t kick a ball for shit. I’m not too sure how any player becomes a professional without being able to accurately, or even semi-accurately, boot a ball up a field. How a goalkeeper is incapable of doing this puzzles me all the more. A goalkeeper needs two skills. He needs to be able to save and he needs to be able kick. Kuszczack seemed incapable of clearing the ball and keeping it on the field. Simple passes were played back to him, often without him being under any pressure, but time and again the ball ended up in the stands. I hope MOTD2 counts up the amount of times he did this!

Now, whilst usually pretty competent between the sticks, with his mistake against Sporting Lisbon aside, he really struggled today. He has come along way since his debut (who can forget the penalty he gave away against Arsenal minutes into his first game for United? And who can forget he actually managed to save Gilberto’s (miskicked) attempt??), but I think United fans are naturally over-sensitive when it comes to goalkeepers. Following the shambles we’ve faced since Schmeichel left, from Taibi to Carroll, Bosnich to Barthez, we are nervous about who Ferguson trusts with the gloves. With his last two matches showing Kuszczack as anything but rock solid, the fear returns.

I remember distinctly being at Old Trafford a couple of seasons ago when United played Newcastle. It was the match when Rooney scored that goal. Tim Howard was in goal that day and I remember sickening fear everytime Newcastle got in to our half of the field. Newcastle were shockingly bad that day, but thanks to shoddy goalkeeping, we went in 1-0 down at half time. This game was a few weeks after our 1-0 defeat to Milan, when Howard, who had been drafted in to replace Carroll for a fuck up in the home leg, fucked up to provide defeat in the away leg. This day against Newcastle, Howard had already shown himself incompetent on a couple of occasions before the goal came with less than half an hour played. The American keeper booted the ball out straight to Ambrose who then left Howard to pick the ball out of his net. Thankfully, Rooney scored probably the most amazing goal I’ve ever seen live and Wes Brown scored a late winner, but the whole team suffered because of the lack of confidence in the keeper.

With away trips to Sunderland and West Ham, I was hoping we’d see Van der Sar return to the first team over the festive period. However, Ferguson revealed post match that this wouldn’t be happening. “We hope Rio and Owen will be ready for Wednesday, but Edwin is out for the next two or three games with a groin injury,” he said.

The return of Rio Ferdinand should add substantial weight to our defence, but is picking up full points over our next two games too much to ask for with Kuszczack in goal?