Can You Imagine If Cantona Did This? 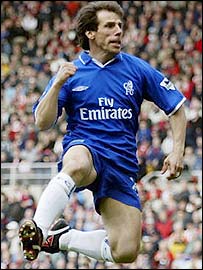 Whilst the Chelsea team of old was not exactly something I had any fondness for, that little Italian chimp, Gianfranco Zola, certainly had skills that were kinder on the eye than anything the blues have to offer these days.

He learnt his trade from Diego Maradona, of all people, before moving to the Premiership when he was 30-years-old. In his first season he scored a cracker against us, leading to praise from our boss.

“He’s a clever little so-and-so,” Fergie said after the match that finished in a draw, a young David Beckham bagging our equaliser. “We started slowly and they caught us cold with a fabulous goal from Zola. He’s a better player than I thought he was. I thought we could push my full-backs forward but he was smart enough to go and play wide. He has got a good head on him.”

Zola is hitting the headlines in England again though and it’s making me wonder whether he does in fact have a good head on him at all.

By the end of his first season he had an FA Cup winners medal to his name, scoring a goal in the final, and being named the Football Writers Player of the Year. In his 7 year career at Stamford Bridge, he won 5 trophies (yes, it seems they did win things before Abramovich!) and Chelsea fans have voted him their greatest ever player. It was a sad day when he left.

So what on earth is he doing going for the West Ham job? Reports suggest he is now the favourite to replace Alan Curbishley, with an announcement expected on Thursday to confirm this.

Whilst local lads can take on the role as hero for a lot of clubs, like Alan Shearer for Newcastle, Paul Scholes for United, Robbie Fowler for Liverpool, Tony Adams (ish) for Arsenal and er, Dean Windass at Hull, there are a few foreigners that seem to manage to claim a place in the fans’ hearts forever. Eric Cantona for United, Thierry Henry for Arsenal, Di Canio for West Ham, Georgi Kinkladze for City, Erik Olof Mellberg at Villa, Juhinho for Middlesbrough, and the list goes on.

Zola was that man for Chelsea, the one the fans still talk about and who they utterly idolise, and his number 25 shirt hasn’t been worn since he left 5 years ago. It therefore doesn’t sit quite right with me that he looks to be taking on a job at West Ham, Chelsea’s hateful rivals. Whilst Spurs would be more painful, West Ham are only slightly better in terms of worst clubs he could go to for Chelsea fans.

United fans have endured a similar fate in the summer just gone, with Mark Hughes’ taking over the job at City. However, whilst lots of reds fancied him as the man to replace Sir Alex Ferguson one day, we’d seen him play for Chelsea, Southampton, Everton and Blackburn after leaving us, as well as managing the latter of these clubs for four years. He wasn’t ‘ours’ in the same sense the players mentioned above belong to their team, despite enjoying many years of success at the club and adulation from our fans.

Someone you identify with, a player you’ll sing the praises of, a man you will always claim was the ‘greatest foreigner to ever play in England’. To know that one of your fiercest rivals had got their hands on your idol would be crushing. And wouldn’t they just know it.

The chants that would come from their fans would be painful. Seeing your special player kitted out in their colours on the touchline would be sickening.

Well it seems Zola’s former Chelsea team mate, Frank Leboeuf, feels the same way, and has spoken out in disbelief.

“My only concern is that he was a Chelsea player and not a West Ham player,” he said. “I heard a West Ham fan say that they would rather the club went for Paolo Di Canio because he was a Hammers legend and I can understand that. I never wanted to sign for another club because I gave my faith and my love to Chelsea and I think you have to stick to that. Gianfranco Zola is a legend at Chelsea and I don’t see him at West Ham. I’ve nothing against West Ham but Zola belongs to Chelsea. Di Canio belongs to West Ham.”

However, Zola has confirmed that the deal is more or less done, telling Chelsea fans that his playing career was a thing of his past and not something to dwell on now.

“This is a new era, a new chapter for me,” he said. “I was an offensive player, who only knew one way to play. That is how my teams will always play. I know there is a rivalry between Chelsea and West Ham, but that is not a problem. My playing career is in my past.”

Whilst not massively concerned with the feelings of Chelsea fans, I think there is something sad about this. Zola will be forever spoilt for the rent boys if he takes on the West Ham job, and as a football fan, I too would prefer to see the likes of Di Canio managing West Ham, just like there are plenty of reds intent on Cantona taking over Fergie’s job, because all fans are entitled to their legends.

What do you make of all this?