Cantona: I'd Love To Be United Manager 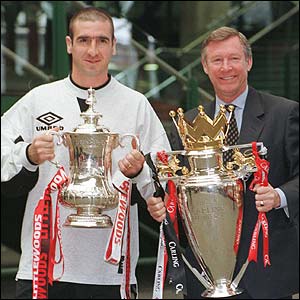 Eric Cantona, the best player to grace the Premiership, is a player United fans idolise, over 10 years after he left the club. The greatness of the man can be measured by the feelings he inspires in the red faithful, who have seen more than their fair share of great players, but still hold Cantona in the highest esteem.

With Ferguson confirming he only has two or three years left in charge at United, there has been plenty of speculation concerning his replacement. Mark Hughes might have just ruled himself out of contention after taking up the managerial post with the bitters, leaving the likes of Carlos Queiroz and Roy Keane as potential candidates.

Today, however, Eric Cantona has put his name forward, claiming he would love to be the man to replace Sir Alex Ferguson.

“Today I do exciting things and I am proving many things,” Cantona said. “Today I can enjoy it even more, but maybe in the future, in a few years’ time when Ferguson retires, yeah, why not? I’d love to.”

When asked if there were any other clubs he would be willing to manage, Cantona replied, “No, Manchester United…or the England national team.”

Whilst the idea of having Cantona back at the club sounds too good to be too, we also have to measure up the practicality of having him as manager. If he was any person other than Eric Cantona, we’d laugh off the idea of a man with such limitted experience taking charge of the biggest club in the World. However, could the intelligence and passion of Cantona be enough to make the team a success?

Would you have Cantona as Fergie’s replacement?