On the back of a brilliant goalscoring run for Manchester United, Edinson Cavani signed a contract extension with the club to ensure he will play at Old Trafford for a further season. Citing the fact he was desperate to play in front of our fans, as his entire time at the club has been blighted by covid preventing crowds, Cavani will finally get to hear his chant sung en masse.

However, it wasn’t so long ago that it appeared as though Cavani would be returning to South America to play for Boca Juniors, whose vice-president is Juan Roman Riquelme.

“The possibility I was going to sign for them was real,” he told journalist Marcos Vitette. “But I was always clear. What has been said and printed is half true, half lies. Sometimes it’s like that. But the chance was real. Has the door with Boca been left open? I haven’t closed it. You’d need to ask Boca if the door is open. But today the reality is what it is, I’m at Manchester United and I’m fully focussed. There are moments when you need to be near your roots and your loved ones. There’s not a year goes by when I don’t think about it. But the decision is a mixture of things, the affection of the people, the attitude of the club with me and my family, my teammates asking me to stay, the manager.”

There have been points during this season when those who calculate betting payouts would claim Ole Gunnar Solskjaer wouldn’t last until the end of the season. As it is, he’s led the team to a comfortable position in 2nd place, with breathing room from the teams below, as well as in a European final. Convincing a player of Cavani’s starture in the game doesn’t do Solskjaer’s reputation any harm either.

“I said when Edinson signed, that he would bring energy, power and leadership to this group and I haven’t been proved wrong, he has been everything I thought he would be and more,” Solskjaer said after Cavani agreed the new deal. “As coaches, we knew about his goalscoring record. However, it is his personality that has brought so much to this squad. He has a winning mentality and has an unequivocal attitude to everything he does. Edinson is one of the last to leave the training ground and sets the tone for the upcoming youngsters with his approach to his profession every single day. I have always wanted him to stay and experience the way our fans will respond to him as a player, and this means he will hopefully get that opportunity.” 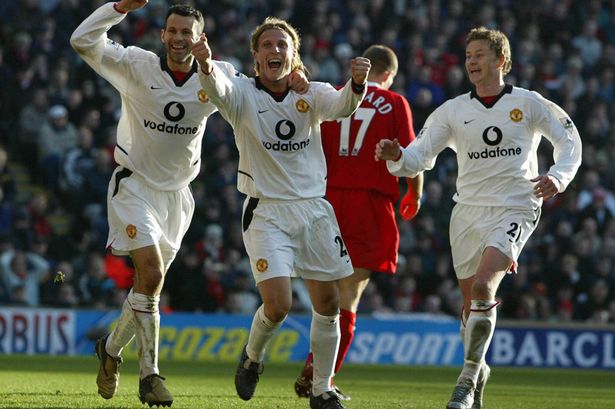 Having been rested against Leicester on Tuesday night, Cavani may well be in the starting line-up for tonight’s game against Liverpool. His compatriot, Diego Forlan, wrote his name in to the history books with two goals in a game at Anfield. His chant, about making the scousers cry, is still sung today. Can Cavani be the next Uruguayan to inflict damage on our rivals and likely deny them a place in next season’s Champions League with a victory tonight?