Last week, the press told us Sir Alex Ferguson said he was wrong to call Paul Ince a ‘big time Charlie’. However, if you read what our manager actually said, it didn’t appear as though he conceded the mistake was in what he said, rather, where he said it.

“That was a mistake,” he said. “We let a camera into our dressing room, which we had never done before, and it won’t happen again.”

Did Fergie think Ince was a gobby, arrogant twat? Yes, probably. Does he think it was a good idea to announce his opinion to the World on camera? No, it seems.

Fact is, Ince was up himself, and he still is. Before the match, he couldn’t see a problem with him one day becoming the United manager, despite only being in the managerial business for a couple of years, his only successes coming with League One and Two clubs. Christ, Darren Ferguson only finished five points behind Paul Ince’s MK Dons last season, should he be waiting for a phone call too?

Well United got the last laugh on Saturday, just as they did in 1999 when Ince celebrating like he’d just won the league after scoring a late equaliser against us, hammering his team at home.

It was certainly our most impressive display of the season so far, despite being without three of our first choice central midfielders. We passed the ball around brilliantly, creating several great chances, as well as hitting the woodwork.

Wayne Rooney bossed the game, sticking two fingers up at all his critics so far this season, scoring his third goal in as many matches, and what a goal it was as well. That is the Rooney we know and love, confidently stroking the ball in to the corner of the goal.

The rain poured down, just as it did in this fixture the season before last, but that didn’t dampen the spirit of our travelling support. The chants were deafening, our lads in full voice, urging the team on. 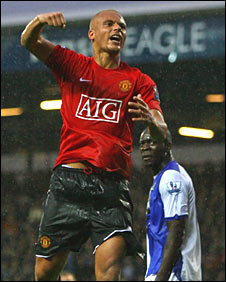 We got the break before half time, with a controversial goal we would have liked to see rubbed out had it been scored against us. Whilst the Blackburn goalkeeper was at fault for not coming out sooner to punch away the ball, there was little he could do about Wes rebounded it in to the net with Vidic’s elbow in his face. There was nothing intentional from the Serbian defender, his back to the keeper and both eyes on the ball, his elbow only raised to aid a jump to reach the ball, but it was still a foul. Two fortunate decisions in two weeks certainly confirms we have the referee’s in our pocket, of course.

Whilst the first goal was fortunate, the second goal was total class. Ronaldo was the provider for Rooney yet again, leaving Martin Olssen for dead as he burst down the right wing, pulling it back for Wayne.

Blackburn had little to offer all match, particularly once Roque Santa Cruz had been subbed off. He was the only player who seemed to pose any kind of real threat, although when he did get in to a promising position, he was on his lonesome, with the United back four to deal with.

I’m still working on changing my opinion of Ronaldo, although the frequency at which he went to ground so easily, with referee Steve Bennett waving away his claims each time, is making it difficult for me. He was booed and jeered all match by the home fans, and as he pointed to his “Champions” badge on his arm, I was cringing more than I was laughing, a marked difference on how my feelings would have been last season. The “Viva Ronaldo” chant that was sung on repeat during this fixture last season made an appearance or two, but it appears as though the fans are still not as loved up as Ronnie would like us to be.