Chelsea Hero Fancies Us Over Them 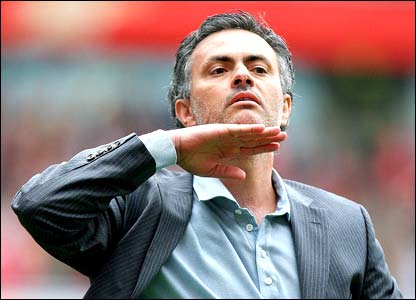 Plenty of Chelsea fans sadly still aren’t over the departure of TNSSO, with every failing replacement strengthening their feelings towards him. They all seem to forget how strongly they were tipped to win the league in his last season, particularly after signing one of the best defenders, midfielders and strikers in the World in the summer, to add to what was already a title winning side. United bought just Michael Carrick.

However, come May, the title was back home in Manchester, with United sitting eight points clear of Chelsea on the day it was confirmed we were Champions, following the weekend where we beat City and they drew with Arsenal.

They seem to forget that in that half-filled stadium on a European night, the fans that did bother to show up booed him and his players off the park. That was the last time they saw him in Stamford Bridge.

Now, to add insult to injury, Mourinho reckons Chelsea won’t have any luck in catching us up for the third year running.

“Guus got off to a great start and I think he will guide Chelsea to many wins,” said Mourinho. “Of course they can win it but you’d think United are just too far in front. You never know in football but I think United will be champions.”