Chelsea Will Win The Title Eh? 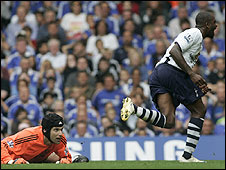 The general consensus this year seems to be that unless Manchester United sign a top class striker, Chelsea will win the league. They have a new manager, they’ve signed Deco and Bosingwa, United are a one man team and will miss Ronaldo, and if not for all their injuries last season they would have won the league. So, it stands to reason that if they keep their players fit, with a better manager now in charge, they’ll win the league this year, right?

I guess my red tinted specs must be having an effect because to me, all that above, is a load of bollocks.

1. Chelsea’s best players are in their 30s. United’s best players are in their early 20’s.
2. No South American World Cup winning manager has been a Champion in any European league. Why should we assume it will be different with Scolari?
3. Bosingwa, despite his good reputation and £16 million price tag, looks shite. Of course, so did Evra when he first came, and in fact, the players are fairly similar in that respect. Eager to go forward but poor defensively. Evra’s defensive game is brilliant now, as (one of) the best for his position in Europe now. Bosingwa might flourish in the same way, but for now, he’s not doing Chelsea any favours.

After a storming debut in a game where Portsmouth capitulated, and a good freekick minutes in to the Wigan match, Deco has contributed very little. He was fairly anonymous for the rest of the Wigan match, where Chelsea were lucky to leave with all three points, and in their draw today, will be remembered more for his yellow card 10 minutes in than anything else. 2 goals in the opening 2 games is promising, but then, can the same be said for Darren Fletcher. The fact that Barcelona were willing to allow the 30-year-old leaves suggests what most of us thought, he’s past his best. Time will tell.
4. Injuries happen to every team but it’s usually only the team that loses who will mention them. I know that’s line I was using back in 05-06 when Ryan Giggs and John O’Shea finished out the season in the centre of our midfield. The fact that our captain missed the entire season, whilst Wayne Rooney, Paul Scholes, Owen Hargreaves and Louis Saha missed months of the season, is forgotten. Why should we need to remember? We won the league. But Chelsea not winning the league is the reason their injuries aren’t forgotten.
5. Cristiano Ronaldo missed 3 games at the start of last season, scoring 1 goal by the end of
September. He will miss 4 games at the start of this season, returning by the end of September. We already are doing better this season than we were last, when he was in the team.

Chelsea’s home draw against Spurs today has highlighted what I’ve been saying all summer, contradicting the popular belief that the blues are favourites. They weren’t good enough for the title last season and without bringing about a big change, they won’t be good enough this season.

The differences United made between 2006 and 2007 was replacing a shoddy goalkeeper who was costing us points with an experienced, World class keeper. The gaping hole in the centre of midfield after Roy Keane left was filled with the modest, yet vitally important, Michael Carrick. That made the difference for us.

Chelsea haven’t improved enough and haven’t made the big changes needed. Their best players are now a year older, whilst our best players are a year closer to reaching their peak. You only have to look at the improvement in Carlos Tevez so far this season to see that.

That is not to say everything is perfect at United either. I’m not for one moment claiming I think we’re going to storm to the title just because of how Chelsea played against Wigan and Tottenham. We were less than convincing ourselves against Newcastle and our display against Zenit St Petersburg didn’t set the World alight either. It’s going to be a close run battle, no doubt, but I have to say I’m confident our trophy will be staying at Old Trafford.