“[They are] not the Manchester of before,” Karl-Heinz Rummenigge said in August 2005, after the player was linked with a move to United. “If I were a player, I would laugh about it.”

“I just can’t imagine that he would go to Manchester United,” Rummenigge said in October 2005. “What would speak for Manchester and against Bayern Munich? Nothing at all. If I were a player I would definitely not go to Manchester.”

“Much as I want him to stay, I feel he will probably leave,” Franz Beckenbauer said a couple of months later. “If he does, the decision only makes sense if he goes to Real Madrid. I know United are also in the hunt, but Michael will only be improving himself by going to Madrid. Anywhere else and it will not be a step up.”

After Ballack snubbed us and later signed for Chelsea, United went in for his former team mate, Owen Hargreaves. Hargreaves won the league and European Cup double in his first season, which is nothing compared to the “Quadruple” Ballack claimed this season. 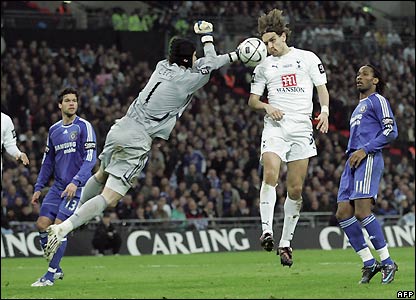 Ballack’s first final of the season came against Spurs in February, which they lost 2-1
Runner up in the League Cup

On the last day of the season, Chelsea drew with Bolton and United beat Wigan.
Runner up in the Premiership

The Champions League final against United goes to a penalty shoot out, which Chelsea lose.
Runner up in the European Cup

Spain outclass Germany from start to finish in the final played last night.
Runner up in the European Championships 08