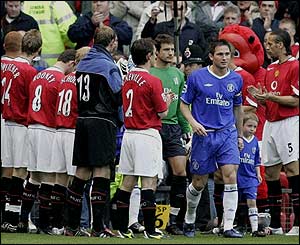 It was an utterly humiliating experience. Chelsea had won the title and their players were given a Guard of Honour. 50 years earlier, Sir Matt Busby had shown the same respect to the first and only other title winning side the rent boys had produced.

Our last home game of the 2004-2005 started well though, with Ruud van Nistelrooy putting us ahead with less than 10 minutes played. Ok, he was offside, but we were going to need all the help we could get to get a result against this efficient Chelsea machine.

The celebrations were jubilant, a feeling that maybe we were going to do what seemed like the impossible running through the home support. It wasn’t to be though, with Tiago equalising ten minutes later, before Gudjohnsen and Joe Cole finished us off in the second half. Gutted. I wasn’t one of the many who left before applauding our team as they carried out their obligatory lap of honour, although there was a definite disappointment, a worry that maybe our glory days were behind us.

There aren’t many games where your team scores 3 goals away from home but leave with nothing, but unfortunately for Hull, that was exactly what happened to them today.

Whilst there was no doubt over who was going to win today, United unsurprisingly showing themselves as the team in control, there certainly were lots of people thinking about Spurs’ magnificent comeback against Arsenal in the week.

So hats off to Hull for coming to Old Trafford and giving it everything they’ve got. So many teams travel to our ground with their heads going down as soon as they concede. Hull bravely played two players up front and fought for a result until the final whistle. You’ve got to respect that.