Does Rooney Have The Right Attitude?

Since Wayne Rooney exploded on the International football scene during Euro 2004, he has faced some criticism in this country, particularly from the England supporting perspective. Whilst all England players massively under perform, there aren’t many players who are the receiving end of more negative England press. Maybe because their hopes for Rooney are so high that they feel let down when he doesn’t play to the best of ability. However, it’d be fair to say that with Rooney, unlike most of the rest of them, at least he appears to be trying to play well, rather than nonchalantly running about the pitch.

The Guardian gives a fairly warm report of Rooney’s performance the other night against the Czech Republic, but recognises his effort is often in vain.

The player’s performance here at Wembley mirrored so many of those he has put in for his country in recent times. The commitment was full-blooded, the energy levels non-stop. He tried so hard to make things happen for his team that he put his blood vessels in danger. Yet when stock was taken, and Capello will now begin the analysis in earnest as his first competitive fixtures loom, the sum total of the damage that Rooney inflicted in the final third was negligible. In cold, hard terms, it was limited to a header straight at Petr Cech on the half-hour and a long-range shot moments later that the Czech goalkeeper made a meal of saving.

Those who wish Rooney would play or could be played up alongside a strike partner, preferably a mobile target man – the prospect of Dimitar Berbatov arriving at Old Trafford is mouth-watering – were disappointed for much of the evening. Capello said that he started Rooney behind Jermain Defoe and alongside Steven Gerrard in a 4-3-2-1 formation but from the first whistle he dropped even deeper in an attempt to link the play or tiptoed wide as England wanted sorely for penetration.

The sight of him almost on the toes of his central defenders or charging into tackles across midfield was disconcerting and not only because there is generally a sharp intake of breath whenever 50-50 balls fall in his vicinity.

The effect was less than splendid isolation for Defoe in the first half and the sense that Rooney might be better advised to leave playmaking duties to those behind him, although Frank Lampard, in central midfield, did little to convince that he could prise the Czechs apart. 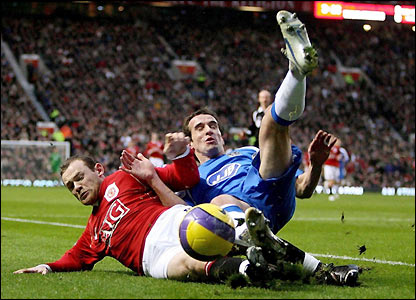 Wayne Rooney loves playing football and loves to win, which you would like to think all players did. However, with Wayne, you can see it every time he’s on the pitch. He never gives less than 100% and the fact we didn’t lose with him on the field last season speaks volumes to what his fighting nature has on our team.

However, at times, this means he’s not in the place you want him to be. Rather than waiting for the ball, he will seek it out, even if that means coming in deep. When playing for United, there is less need to do that, however, when representing England, he’s right not to wait up front for the ball, thanks to the incapability of his team mates. If he waited outside the box for the ball, he’d be waiting all evening, with the service to the strikers so poor.

“Maybe at times I am a bit too honest, and at club level the manager is telling me not to defend too much, to try and save some energy for when we are attacking,” Rooney said. “But sometimes you just want to win the ball back and work hard for the team. That is just how I play. Maybe it does affect my goals tally, but hopefully I can learn and get better.”

Rooney is totally selfless in the way he plays, but this can at times work as a disadvantage to the team. Does he need to change and focus on simply attacking?