Don't Worry Rio, We Used To Hate You Too! 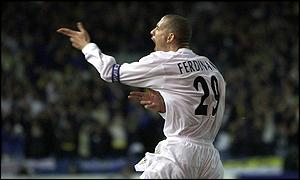 “I don’t care about Rio, Rio don’t care about me, all I care about, is watching FC!” is sung at FC United games. Whilst most United fans have forgiven Rio Ferdinand for the fuss over his contract a few years ago, it is something that won’t be forgotten. Whilst players like Paul Scholes don’t even have an agent, our fans were furious to learn Rio was stalling on contract worth hundreds of thousands of quid a month, not along after returning from an eight month ban for failing to show up for a drugs’ test. We’d been paying his wages all that time whilst he wasn’t playing, then almost as soon as he returned, he was demanding more money.

Fortunately, Rio has grown up somewhat since then and his dedicated performances for our club have won the majority of fans over. However, Ferdinand has today admitted he didn’t like our club long before our fans turned on him!

“I couldn’t stand United when I was 21 or 22 because they used to win everything,” said Ferdinand. “A United fan came up to me once and said “I bet you’d love to come to United”. ‘I said “I’ll never go there”. But I have to admit I was so excited when I arrived.”