El Blanco Pele Is Back 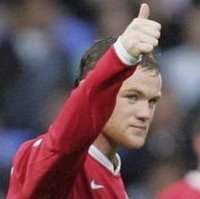 Wayne Rooney has been a big feature in any tabloid newspaper over the past few weeks. Despite scoring two goals on the opening day of the season against Fulham, he has gone through a bad patch in form. After breaking bones in his foot, only to return this summer, and get sent off in both the World Cup and pre-season tour in Amsterdam, he faced a number of games out with suspension. This, of course, was not taking in to consideration by the national press, who were bordering on hysteria, in respect to Rooney’s dip in form.

Over the past few weeks, any United fan has been happy with Rooney’s displays. We’ve been winning games, scoring plenty of goals, of which Rooney helped make. However, he still hadn’t scored a goal, and this, for some reason, was of massive concern to the footballing world. Everyone from team mate to coach, old pro to rival manager, felt it was necessary to comment on the situation, and back Rooney to return to his best, as if they were revealing a deep wisdom.

Rooney turned twenty one this week, and in the lead up to the Bolton game, as all the other games for the past month or so, it was quoted how long it had been since Wayne had found the back of the net. Bolton had yet to concede at home, and as we were made clearly aware, Rooney had reached his tenth game without scoring.

United started the day brightly, bombarding the Bolton box. It was no surprise then when Rooney struck with his left foot on ten minutes to give United the lead. Clearly, the lad got a taste for the scoring feeling, and six minutes later, scored an even better goal with his right foot. It was clear at this point how the day would end, and with time running out, Rooney sealed his hatrick a minute before time. He proudly paraded the match ball, which was now his, to the travelling United fans.

He’d answered the critics with his display, but still enjoyed commenting on the recent “situation” to Sky Sports after the game. “There has been a lot of talk by a lot of people over the last few weeks saying I couldn’t do it any more, stuff like that, so the feeling when the first goal went in was brilliant. Although I am not too worried about not scoring as long as we get the result, it was a relief, especially as I had gone such a long time without scoring. To finish the hat-trick was nice. I am delighted and happy just to be back amongst the goals again and to have secured the three points in what was a big game for us. I’m really proud and happy with the performance.”

Rooney is now two goals away from being the league’s top scorer, with five goals in seven appearances. It also moves him up to the third highest scorer at the club, behind Ole and Saha, in a team currently scoring goals for fun. Today’s result gives United thirty two goals from fourteen games, with the next highest scoring English club, Chelsea, on twenty five goals.
Of course I am over the moon for Wayne, but also over the moon for the club, who are quickly making fools of all the people who doubted the club after the selling on of a certain Dutch player. Congratulations Rooney, onwards and upwards!

Got something to add? Stop by at RepublikOfMancunia.org