European Cup: What a difference a year makes... 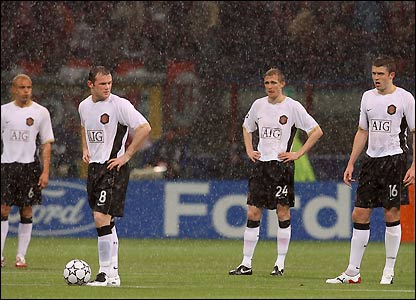 This time last season, it appeared as though it would be plain sailing to get past the group stages of the Champions League. We’d seen off Celtic, Benfica and Copenhagen in our opening three matches, so with three games left to play, there was nothing to fear. However, somehow it began to fall to pieces, with away defeats to Celtic and Copenhagen, meaning the last game became a must win. Benfica, the side who’d knocked us out at the group stages the season before, had the opportunity to do it again, this time at Old Trafford. When United went a goal behind after half an hour some may have worried history might repeat itself.

The clues were pretty obvious, if you look back on those opening three games, as to why qualification to the next round would be more difficult than it appeared on paper. United scraped past Celtic at home in the first game, courtesy of a debateable penalty won by Giggsy. Celtic had taken the lead in the first half, only for Saha’s converted penalty to put us on level terms. United took the lead ten minutes later, after Graveson gave the ball away. Still, Celtic weren’t giving up, and a few minutes later we were drawing again thanks to a cracking Nakamura free kick. Fortunately, straight after the break Graveson gave us the ball again, leading to our third and winning goal from Solskjaer. Hardly convincing, but regardless, it was three points on the board.

Our next match was away to Benfica, where we were victorious, and yet again, we could be said to be fortunate to have collected all three points. We were certainly the happier team at half time, when we went in at nil nil. Benfica had dived and cheated their way through the first forty five minutes, but had seen most, if not all, the chances, and dominated possession whilst we carelessly gave it away. With an hour played, Saha took his chances on the counter from outside the box, and a slight deflection saw his shot plunge down over the keeper in to the net.

United then saw off FC Copenhagen at home, in a game which they were certainly favourites to win. Scholesy opened the scoring just before half time with a great strike, and whilst our following two goals were to be entertaining, they certainly were not classics. John O’Shea scored by accident just as Ferguson walked out of the tunnel at the restart, jumping for a corner, and the ball catching his trailing leg and rebounding in to the net. The third and final goal came from fans’ favourite Kieran Richardson, the ultimate player, who struck from some distance in his typical selfless manner. What should have been a simple save for the keeper who up to that point had played out of his skin, was royally fucked up, and the ball rolled under him in to the net.

So whilst securing nine points out of a possible nine, United looked far from convincing. Whilst there might have been shock in the media following our next two away defeats to Copenhagen and Celtic, United had already shown how vulnerable they were.

Ferguson foolishly sent a weakened side to Copenhagen, making six changes to the team which battered Bolton at the Reebok, and despite looking the better side in the scrappy game, we left with nothing, after a 1-0 loss. United were seemingly in control when up in Scotland, forcing the Celtic fans in to an eerie silence, as the travelling reds out sung the usually loud home support. However, with ten minutes to go, we experienced yet another stunning Nakamura free kick. Even an injury time penalty couldn’t save us, and we lost 1-0, needing a point at home to Benfica.

Despite conceding the first goal of the match, there was little doubt United were going to successfully get to the group stages, as we looked on the verge of scoring throughout the first half. Going a goal behind was just what the team needed to ignite a fighting comeback, with Vidic drawing us level on the half time mark. Giggs made his goal look easy, heading past the keeper accurately to give us the lead with an hour played, and Saha finished the game off fifteen minutes later.

So here we are, yet again, on nine points out of nine, and there could be the temptation to compare this season with last. However, I feel as though this season is very different for a number of reasons. For one, we have shown that we are able to transfer league form to Europe, with solid wins away from home against Sporting and Dynamo Kiev, and our 1-0 victory over grudge bearing Roma. We aren’t scraping wins in Europe this season, we are showing ourselves to be the better side and the deserved winners.

Our squad is considerably better than last season, particularly for fighting on the European front. Hargreaves gives us that added defensive level, sitting just in front of our back four, to help us when facing strong attacks. He’s a fighter and works hard from the first to the final whistle. Anderson has shown that he can win the ball all over the park, and play the killer ball which is needed to split defences in half. Nani gives us extra attacking options and leaves our opposition with a dilemma on who to double mark when he is charging down the parallel wing to Ronaldo. Tevez can hold the ball up well, he can turn his man, and as we’ve seen over recent weeks, can work marvellously with Rooney. Last season we relied on upon Giggs and Scholes to carry us through, but by the semi finals, they both looked completely knackered. Nani and Anderson will eagerly lift the burden from our veterans’ shoulders. They should certainly help us be victorious in Europe for the whole stretch, rather than just leading us painfully close for us to be dumped out in such a gutless fashion.

Gary Neville, who should be available for selection for our game against Dynamo Kiev tomorrow, has today spoken to Manchester United radio. “We’re now in a really strong position where we just need to win one game… then maybe those players who haven’t been playing for the last eight months can get on the pitch for the matches that don’t matter so much!”

Neville echoed Giggs’ sentiments of yesterday, who said, “We’ve got to finish the job off as quickly as we can. Then, come the Roma and Lisbon games, the manager can give players who haven’t played some time on the pitch and that could become important for the Premiership.”

We have a Premiership title to retain, and the sooner we can push Europe out of our minds, the better our focus and performances should be in the league. It would be wonderful for the likes of Eagles and Simpson to get two full games in the Champions League this season, but that can only come if a victory is recorded on Wednesday. Of course, you have to fancy us to win, but then, we’d have fancied a win this time last season against Copenhagen. But as I said earlier, this season is different from last, and not just because of the way we have been playing or the new signings we now have, but because Ferguson is even older, wiser, and probably more desperate. He knows he cannot go on forever, and every season without another European title is a season wasted. He won’t be making the same mistakes of last season, dropping first teamers, which could have cost him dearly. The hunger he has for European success will be coming close to all consuming, and the sooner it can be fed, the better.

Is this our year? As I’ve said time and again this season, I feel as though it is, for the sheer magic of the European Cup and the anniversaries this year marks. All things combined, we look stronger than we have done since 1999, and now is the time for us to capture it. Let’s wrap up a win tomorrow, and see the lads lead us one step closer to Moscow.

Will United beat Dynamo Kiev tomorrow? Which team will Ferguson put out, considering we have a Premiership fixture three days later?