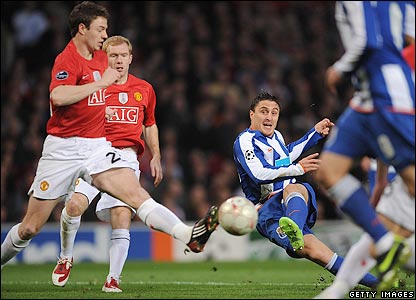 Whilst the media often describe Jonny Evans as “young” and “inexperienced”, he is quick to remind people that he’s spent a season in the Premiership already, striving to keep the likes of Chelsea and Arsenal at bay when playing for a much more vulnerable team than Manchester United!

That experience has clearly paid off, with Evans slotting in with ease in to our back four, when covering for the injured Rio Ferdinand or suspended Nemanja Vidic.

However, against Porto, he had his first major slip up, gifting our opponents their first goal early in the match, but he claims our defensive weaknesses at present haven’t arisen from a lack of confidence.

“I don’t think there is a confidence issue in this team,” said Evans. “I just think teams are raising their game against us. It’s coming to the end of the season and teams need to start winning. Fulham were still trying to avoid relegation and Aston Villa are still trying to reach the Champions League so it was going to be that bit tougher. I think it has really been a hectic week, especially with the schedule we’ve had before that. There’s no doubt we haven’t been defending as well as we have been, but you have stages like that in football. It would be very tough to go the whole season having clean sheets the whole way through. Maybe it’s been our own fault. Maybe we’ve become a bit complacent. We haven’t been defending for our lives. We go into the games really confident. For the first goal I should have done better. It was a mistake, a bad clearance and I should have just stuck it out. But the second goal everyone would be disappointed with it.”