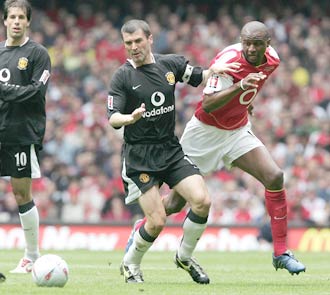 Manchester United take on Chelsea this weekend, in a match the blues will certainly be eager to win after losing out to us in the Premiership and European Cup final last season.

Whilst during the past four years Chelsea have posed the biggest threat to us, between 1997 and 2003, the league title was passed back and forth between Old Trafford and Highbury. The hatred was pretty fierce, as it was not just the fans, but the players seemingly openly disliking their opponents.

Sir Alex Ferguson has said today that whilst Chelsea give us a tougher time than Arsenal do, the Gunner’s rivalry meant a lot more.

Since Fergie took over at United in 1986, Arsenal have more league wins against us than any other side, beating us an impressive 13 times, with Wenger getting 8 Premiership victories over us.

This video looks at the rivalry in more detail, going back to that brawl in 1990.

In those 10 years since Wenger took over, the matches have always been about the two most attractive English sides battling it out, which meant you could never predict the winner.

From a United perspective, our most important wins in that time have been the FA Cup semi-final replay in 1999, ending their unbeaten run in 2005 before going on to beat them 4-2 at Highbury in the same season, as well as last season’s 2-1 victory at Old Trafford which ended their season and took us one step closer to winning the title.

“Of course we’ve got Chelsea at the moment, that’s without question,” said Ferguson. “But the history of Arsenal versus Manchester means that you’re not just talking about winning a football match, you’re talking about your own history against the other team’s history. There’s a dominance attached to that. You want to be the dominant team and they want to be the dominant team – and we’ve had some volatile matches because of that. But you can’t beat the history and the quality that both teams believe in and the way they want to play has never changed.”

Following last season’s victory at Old Trafford, Ferguson and Wenger seemed to get on surprisingly well, with our manager walking off the field with his arm around the Frenchman. It seems both of them are far more subdued now they’re getting on a bit.

Wenger has agreed with Fergie though, claiming United is ‘the big game’ of the season for Arsenal.

“It is usually the decider of the season – big games that tell you a lot about your team,” he said. “Will they be capable of winning the big matches? You go into the season with the feeling that you must win the big games and the big game usually is Manchester United.”

In terms of points, beating Chelsea is more important than beating Arsenal, as it will be the blues who push us hardest for the title. However, for me, I still enjoy a result against Arsenal far more than I do against the rent boys. Maybe it was the time of the season, but I certainly had a bigger smile on my face walking away from Old Trafford after our 2-1 over Arsenal than I did after our 2-0 over Chelsea.

Maybe after 10 years of battling it out with Chelsea, it will feel differently, but for now, I enjoy getting one over on Arsenal more than I do Chelsea.

The league chase aside, who do you prefer to see us beat?