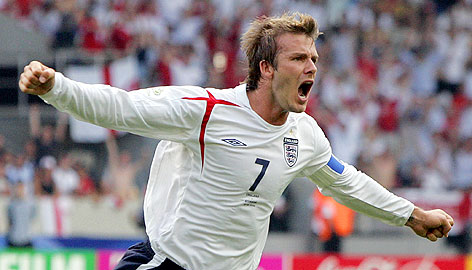 Sir Alex Ferguson has long been blamed for David Beckham’s decision to leave Manchester United. The fact that Becks spent 18 months renegotiating his contract, unhappy with with the deal he was offered on image rights, to stay at the club he’d loved since he was a lad, is often forgotten. The writing was on the wall from the day Fergie kicked the boot at Beckham, an unintentional act as far as the manager is concerned.

It looked as though Beckham was on a downward spiral after leaving United. He hadn’t won a trophy since his big money move to the Spanish giants and was dropped by Capello for Real Madrid last season after agreeing on a deal with LA Galaxy. “We can’t count on him and we won’t count on him because he has committed himself to another club,” said Capello. “A player that has such an important contract with another club can’t play for us. He will not play. He will train with us but he is not going to play.”

However, Beckham redeemed himself, won Capello over, and his great form played a part in Real’s title winning season. Beckham claimed his first winners medal since leaving United, and Capello admitted his wrong doing. “On the sporting side we have made a decision and I am the one that has the maximum responsibility. The truth is that with him we made a mistake,” he said. “Beckham is a great player. Now he is playing at the same level as he did at Manchester United. He is a player that has recovered his physical and psychological condition because he was upset not to be playing with his national team. For every player, the national team is important and for English players, more so.”

When Capello took the England job, Beckham would have been right to fear for his place with the national side, after being dropped by the manager at his former club. With 99 caps to his name, Becks was obviously eager to get one more game, and with the friendly against Switzerland planned, it seemed as though he was in with his chance. “To deny him his 100th cap would not be right,” said Ferguson of his former player. “I think he will get his 100th cap. I don’t think there is any doubt about that.”

However, Capello has named his 30 man squad and left Beckham out, due to his lack of match time. The fact that Beckham decided to take a week’s holiday in the lead up to the squad being announced probably didn’t help his cause. Ferguson has today backed Capello’s decision to leave Beckham out, saying that this is a must win game for the new manager, and he cannot afford sentimentality. “I am not surprised he has been left out,” Fergie said. “What Fabio has said is that David is not match fit. He wants players who are match fit and David has not played any football. That is the reason he has not been picked. It is straightforward. You have to think of Fabio’s position. He has to win that game. It is an important match as it is his first as manager of England and he is a foreign coach with a great reputation.”

Is Fergie right to change his tune on whether Capello was right to drop Beckham?