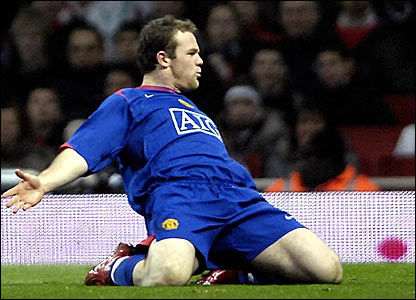 Getting a victory over Arsenal is always something I enjoy, whether we’re in a position to fight it out for the league or not. There have been so many great matches between the two clubs over the past 10 years or more, fuelled by the intense rivalry between the two clubs for the Premiership title, which makes a victory always satisfying.

Last season, United beat Arsenal on two occasions, as well as drawing at the Emirates. There was their humiliating 4-0 defeat in the FA Cup, as well as their 2-1 loss in the league, when we condemned them to yet another trophyless season.

It was the draw away that left a nasty taste in the mouth though. We had taken the lead on two occasions, yet somehow, managed to leave with just one point. William Gallas scored a last minute goal to secure them a point and whilst Arsenal celebrated as though the title was won, our lads were dejected and frustrated. Dropping two points in the final minutes is always a downer, however, memories of the Emirates match the season before were brought back to emphasise what a rubbish day it had been for our club.

January 21st, 2007. Wayne Rooney took the lead at the Emirates ten minutes in to the second half and United looked favourites to win and go nine points clear at the top of the table. However, 7 minutes from time Robin van Persie levelled the score, before Thierry Henry scored the winner in the final minute. Gutting. (But less gutting when you remember we won the league four months later, finishing over 20 points ahead of the Gunners).

Sir Alex Ferguson is well-famed for his volatile reactions following defeat and his explosion, nicknamed ‘the hairdryer treatment’, can leave the toughest of men quaking in their boots.

Ryan Giggs has revealed that the new foreign players at Old Trafford are quite shocked when Fergie comes down on them in such a way, admitting the last time this happened was the 2-1 defeat at the Emirates.

“I think the last time was at Arsenal the season before last when Thierry Henry scored in the last minute,” he said. “The manager went into one and I think some of the foreign lads thought ‘bloody hell, what’s going on here? This is not what I signed for.’ It was funny.”

Giggs then went on to discuss his personal experience of the hairdryer treatment, which dates back to when he was just a teenager at the club.

“The manager would watch me when I was 13, 14, and I’d get the hairdryer treatment. My attitude was always ‘right, I’ll show him he’s wrong,” he said. “He’d shout everything he could think of as loudly as he could. Telling you how badly you’d played and you’d never play for the club again. Dropping you was as bad as it could get. He’d never have a go for missing a chance or an open goal. But if you weren’t working hard enough or had a shot when someone else was in a better position to score, they were the worst crimes imaginable to him. I used to be scared of it, still am I suppose. He can still drop you, as he did last season. The good thing now is I get ‘rested.’ It’s the best thing about getting older.”